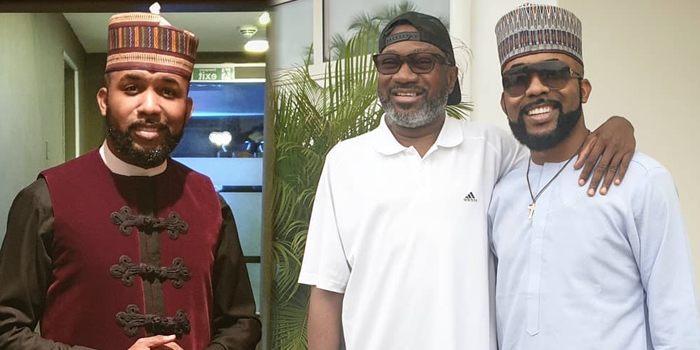 Ahead of the elections set to hold on Saturday 23, February, it appears a Nigerian celebrity contesting has stopped by at the residence of billionaire businessman Femi Otedola, for some candid advise.

Popular Nigerian singer Bankole Wellington also known by many as Banky W, recently took to his social media page to share a picture in which he was spotted striking a pose with the businessman.

Banky who is contesting to represent the Eti-Osa constituency under the umbrella of the Modern Democratic Party (MDP), accompanied the photo post with a caption in which he had heartily thanked Otedola for accommodating his presence.

He went on to express his appreciation for the words of encouragement and advise he had received from the business mogul.

“Egbon @femiotedola.. thank you SO much for your time, advice, and encouragement. I am forever grateful. God bless you Sir.”

Egbon @femiotedola.. thank you SO much for your time, advice, and encouragement. I am forever grateful. God bless you Sir. 🙏🏽🙏🏽🙏🏽

A visit to Otedola’s Instagram page also revealed that he had posted a similar picture. In his caption, he revealed that he was heading to the gym when the politician stopped by. He cheered him up with the thumbs up emoticon.

On my way to the gym on this fine public holiday, look who stopped by! @BankyWellington 👍🏾 … F.Ote💲