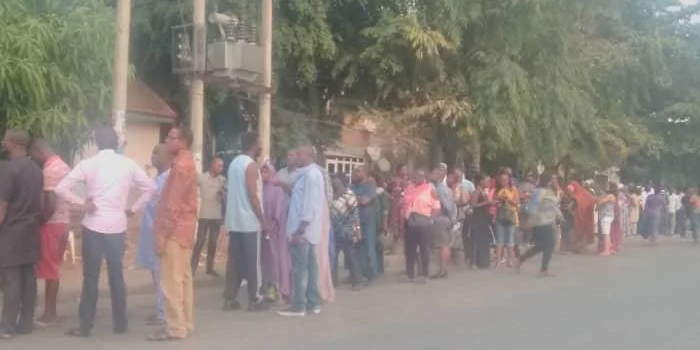 #NigeriaDecide: Protest in Abuja over delayed counting of votes

Electorates in the Federal Capital Territory, FCT, have protested the delay in the counting of votes hours after accreditation and voting ended in some polling units.

At Polling Unit 018 in Abuja Municipal Area Council (AMAC), some voters were seen in their numbers demanding immediate counting of the votes, alleging plots by some officials of the Independent National Electoral Commission, INEC, to manipulate election results in favour of a particular party.

One of the protesters, George Ekwugha said: “We don’t understand why the delay in counting of our votes. Voting and accreditation ended here by 2:30 pm but they (INEC officials) have refused to count the votes two hours later.

“Other polling units around have started announcing their results. We want the votes counted in daylight in our presence. We’ll reject result counted at night.”

Security operatives excused the protesters out of close proximity to the sensitive materials but within sight of the polling unit.

But, an INEC official who declined to reveal his name, addressed the protesters behind a barricade, saying that the delay in vote counting was to enable them cancel-out the unused ballot sheets to prevent manipulation.

He explained: “There are some things that need to be done before counting the
votes. There are some materials that were unused. We need to make them tally with the total number of votes.

“For instance, if you’re given 20 presidential (ballot sheet) booklets and you use five, you need to cancel the remaining booklets sheet-by-sheet. After that, we have to integrate them together.”

Homeless Nigerian man arrested in Cambodia, says he has no job, passport and money

Lady flogs her mother mercilessly after her pastor told her that she’s a witch.