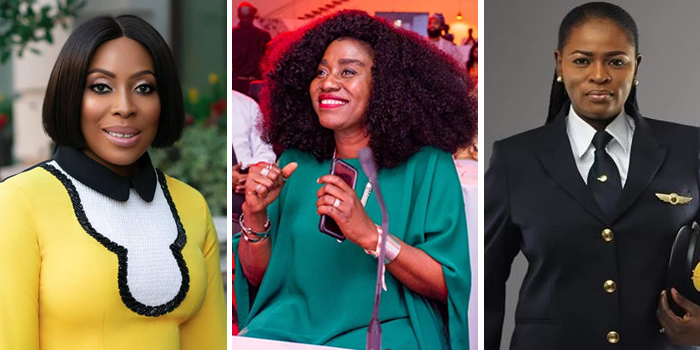 International Women’s Day: 5 legendary Nigerian women that have set pace across the world

Nigeria as a nation is not one without its flaws especially in the area of patriarchy. It is a society where the girl child education still remains a fundamental issue, it is a society where violence against women is on the rise and a society where women are continuously denied their fundamental rights. Despite all of this, history has shown that women destined for greatness cannot be stopped, no matter the blows they are dealt.

With all of these factors determining how far a woman is allowed to go, there are many Nigerian women out there who have proven that dreams; no matter how little, are valid and achievable. As the world celebrates International Women’s Day, Legit has taken out time to celebrate some of these women.

From actors, media moguls, photographers to athletes, activists, pilots and engineers, Nigerian women stay steady breaking boundaries and remain unapologetic about it. From carving a niche for themselves in male dominated industries to becoming pioneers in their various works of life, there is no stopping the Nigerian woman.

Here are six Nigerian women who have made a name for themselves and remain powerful inspirations to many other women all over the world:

The prolific Nollywood actress, who got into the movie industry in the year 1998, is a perfect definition of the word unstoppable. From being a screen goddess, Genevieve built herself into a powerful force to reckon with in the Nigerian movie story.

She went from being a mere pretty-faced actor to directing, producing and screenwriting her own works. Her directional debut movie, Lionheart, put Nigeria on the global map after it was purchased by the largest online streaming service, Netflix.

At a time when women were relegated to the background and restricted to certain jobs, this amazing woman in the name of Toyin Sokefun-Bello popularly known as TY Bello proved to many that the word impossible only exists in the minds of those who harbor doubt.

Considered one of the pioneer female photographers in Nigeria, TY Bello has become a household name in Nigeria as she has used her talents to change lives as seen in the case of the popular bread seller, Olajumoke. She also organizes an annual photography exhibition to raise funds for orphans in Nigeria.

She was the official photographer for then-president, Goodluck Jonathan. With the likes of TY Bello in the world, several female photography lovers can pursue their dreams without fear.

Considered one of Nigeria’s most shrewd businesswoman in the media industry, it came as no surprise when Mo Abudu was described as Africa’s Most Successful Woman. Her reputation as a successful media proprietor is one that still marvels and inspires a lot of women.

With a network (Ebony TV) airing in more than 49 countries across Africa, Mo Abudu has not only grown her business but has empowered a lot of women who have in turn made a name for themselves. She was listed as one of the 25 Most Powerful Women in Global TV by The Hollywood Reporter in 2013 and received the Entrepreneur of the Year award by Women Werk in New York in 2014.

From running a gossip blog to becoming a media mogul, the success story of Linda Ikeji is indeed a poster child for the word, determination.

Linda Ikeji who turned blogging into a commercial business, raking in millions of naira, has become a household name in the Nigerian media. From running a gossip blog to starting an online TV with thousands of subscribers from across the world, Linda Ikeji has proven that there is no stopping a determined woman.

Not only has she carved her niche, she has also empowered and paved the way for millions of young girls in the country to pursue their dreams and do great things.

While America, especially the black community beam with pride as one of their own, Katherine Johnson, was recognized for the crucial role she played as a mathematician in the success of the first and subsequent US manned spaceflights, in Nigeria; we have Wendy Okolo.

Okolo has become the first black woman to get a doctorate degree in aerospace engineering. The 30-year-old lady who was born to a family of six has taken off her career at the national aeronautics and space administration (NASA), a United States agency responsible for the civilian space program as well as aeronautics and aerospace research.

Although not yet a household name, Adeola has certainly made a lot of Nigerian women proud. Not only has she successfully made a name for herself in what is considered a male dominated industry especially in Nigeria, she has also broken a barrier and paved the way for many Nigerian women in the aviation industry.

Adeola has become the first female Nigerian pilot with Qatar Airways. She not only proved the importance of believing in oneself but also the need to keep pushing no matter how difficult it may appear.

For the many women who have been inspired, for the many young girls looking up to these women and for the impact they’ve had on the lives of millions of women in Nigeria, We celebrates all women out there.