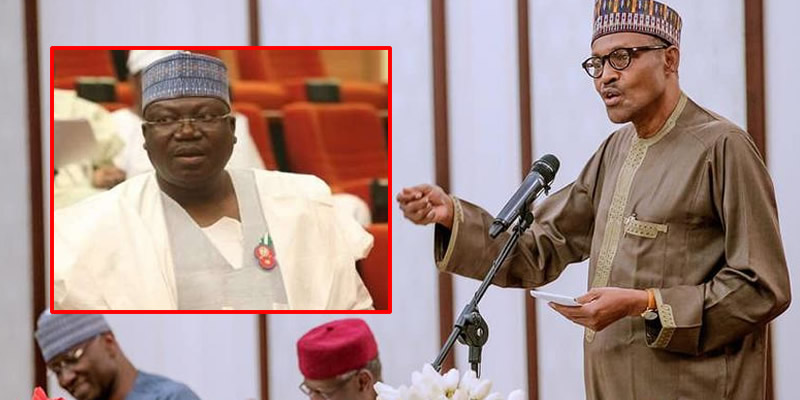 President Muhammadu Buhari, the All Progressives Congress (APC) leadership and most APC governors have endorsed the Senate Leader after consultations.

The leaders were said to have considered  Lawan’s “qualifications, prudence, accountability, loyalty and rich legislative experience” which will assist the APC government to have a robust Executive-Legislative relationship to fast-track development.

Lawan is believed to be a “leader with much focus on accountability”.

It was also learnt that Buhari preferred Lawan because he repeatedly told senators-elect that he will “like to leave sustainable legacies; to be remembered for something”.

Buhari, who was emotional at a stage in his speech during a dinner with old and would-be lawmakers on Monday, regretted the frosty relationship between his administration and the leadership of the 8th National Assembly.

Senators Danjuma Goje and Adamu Abdullahi were calm, but Senator Ali Ndume protested against what he called Lawan’s imposition.

The search for the President of the Ninth Senate started immediately after the February 23 elections when members of the “kitchen cabinet” sought the opinion of the President on the direction to go.

It was gathered that the President wasted no time in picking Lawan.

Besides, every time the governors met with Buhari, his refrain was always “I will be involved in the election of principal officers in the National Assembly this time around”.

A source, who spoke in confidence, said: “The choice of Lawan for the office was not the making of the National Chairman of APC, Comrade Adams Oshiomhole. The President had zeroed in on Lawan since 2015 and he did not mince words in asking the leaders of the party, APC governors and even senators-elect to ‘leave the Senate President for me’.”

“He spent the past few weeks to consult with some leaders of APC, governors and senators-elect to feel their pulse on Lawan. Having realised his position, some APC governors asked senators-elect from their states to be part of Lawan’s campaign.

“When Ndume met with one of the leaders of the party, he only said: ‘Whichever direction the President is going, I will follow him. You cannot expect me to work against the interest of the President.’

“Security reports on Lawan’s lifestyle revealed a commitment to accountability. He does not indulge in wasteful spending. He fits into the austere focus of Buhari.”

Security agencies, it was learnt, rated Lawan as a loyal politician, who has been consistent in the last 20 years as a progressive.

“The dilemma of the President was how to break the news to senators-elect without making it to look like an imposition. Again, he was not too comfortable with the intrigues on the race for Senate presidency. This was why he felt he must address it before going on break,” the source said, adding:

“Buhari only routed his choice through the National Chairman of APC, Adams Oshiomhole, to demonstrate deference to party and promote discipline in APC.”

A source said: “The President actually respected us and named his preferences for President of the Senate and Speaker of the House of Representatives.

“Oshiomhole’s job was simple. He was only to convey the decision of the leader of the party to our members-elect in the National Assembly. We are trying to avoid what happened in 2015.”