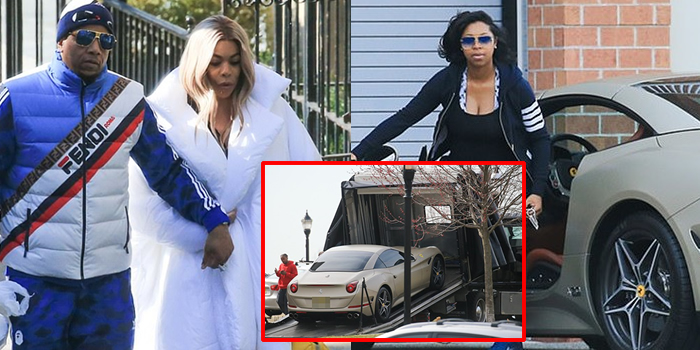 Wendy Williams is coming down hard on her cheating husband Kevin Hunter and his mistress.

For months, there’s been rumours Kevin Hunter has been cheating on Wendy with Sharina Husdon for over 10 years and was spending Wendy’s money on her. There were even photos to back up these rumours. But Wendy kept insisting her marriage was fine, until Kevin got Sharina pregnant.

At the time, Williams reacted to the rumours plaguing her marriage, saying:

“Marriages are not easy. And don’t ask me about mine until you see [my wedding ring] gone – it ain’t going anywhere, not in this lifetime.”

According to recent reports, Wendy who felt betrayed by her philandering husband of nearly 22 years, has served him divorce papers. Not only that, she has fired him from her show and as her manager and turned deaf ears to his apologies. She has also given him 48 hours to move out of their matrimonial home in Livingstone, New Jersey.

As for Sharina, the new mother’s $215K gold Ferrari which Kevin bought was seen being towed away and, according to reports, Wendy had something to do with it.

Hunter released an apology on Tuesday admitting he was not “proud of his recent actions” and was “trying to right some wrongs”. He also said he was taking “full accountability” for what he had done.

28 years ago I met an amazing woman: Wendy Williams. At the time, I didn’t realize that she would not only become my wife, but would also change the face of entertainment and the world.

I have dedicated most of our lives to the business empire that is Wendy Williams Hunter, a person that I truly love and respect unconditionally.

I am not proud of my recent actions and take full accountability and apologize to my wife, my family and her amazing fans. I am going through a time of self-reflection and am trying to right some wrongs.

No matter what the outcome is or what the future holds, we are still The Hunter Family and I will continue to work with and fully support my wife in this business and through any and all obstacles she may face living her new life of sobriety, while I also work on mine.

I ask that you please give me and my family privacy as we heal. Thank you.

His apology came after the flashy $215,000-plus gold Ferrari Portofino he gifted Hudson was seen being towed away, a day after Wendy hit him with the divorce papers.

The new Ferrari was loaded onto a truck and taken away one day after Daily Mail published photos of the luxury car Hunter gifted Hudson.

It is revealed Kevin had expected Wendy will let him stay on the show even though she was divorcing him. But Wendy is completely done with him both personally and professionally,  especially after she saw the photos of him and Sharina last week going out for dinner in a new maroon convertible Rolls-Royce and also photos of Sharina driving around in a new Ferrari.

Wendy’s sister, Wanda, came from Florida over the weekend to help Wendy sort things out and they both mean business.

Kevin Hunter blames Wendy Williams for fight with their son