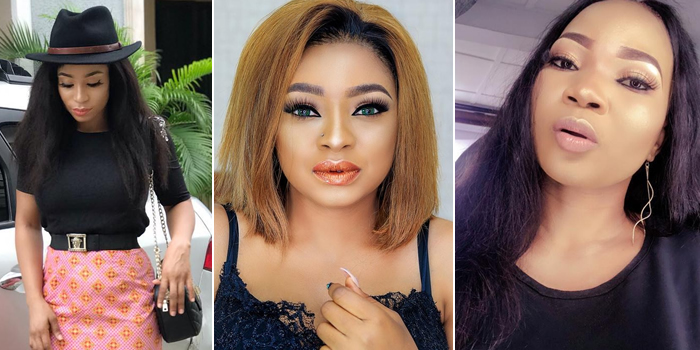 Meet 10 pretty, young Actresses in Yoruba Movie Industry and why men are crazy about them

Undoubtedly, there are thousands of beautiful women especially the young ladies who are doing well for themselves in the industry. They not only beautiful but extraordinary talented.

However, we present to you 10 out of the thousands who are more pretty and also intelligent. Their ways of interpreting their roles in movies makes men aiming to have them by their side. Enjoy the excerpts:

Eniola Ajao is a pretty and talented actress rocking the industry in Abeokuta, Ogun State. She is the next star in the making after the likes of Taiwo Aromokun and Tunde Owokoniran graduated from Odunlade Adekola. Being a producer, Odunlade has been featuring the pretty babe in most of his jobs lately especially the one produced by the students of his theater school.

BBNaija 2019: “Diane Used Juju To Lengthen Her Stay In The House”-…

First photo of Bidemi Kosoko and her baby

A quick flip through the name Mercy Ajoke Ebosele would suggest the region of Nigeria this actress comes from. However, she has pitched her tent and made a name for herself in the Yoruba film industry. Though not too tall to go for a beauty contest but one thing that cannot be taken away from her is how sexy this baby faced chic is.

Standing in front of this sexy actress, I bet you would be carried away by the following; the softness of her palm, her mild smile, the smoothness of her skin colour, her beauty, her sexy looks, which has over the years made her the toast of big boys watching the industry. That is what Bidemi Kosoko, daughter of veteran actor, Jide Kosoko epitomizes.

Beautiful Olaitan Ogungbile, a.k.a Sugar is one of the hot actresses promising to rise to stardom soon. She is an actress and a Producer. She got into the industry through Authentic School of Drama owned by Muyiwa Ademola.

Next on this list is pretty actress, Kanyinsola Momoh. The Abeokuta Ogun State-based actress delved into acting not long ago but she has carved a niche for herself. Her acting prowess is unique and incomparable. Her role in a movie titled Ayipada made her a force to reckon with in the industry.

Another person on this list is highly controversial actress, Funmi Awelewa who got into acting in august 2013 and she is right now enjoying the best of her time. Though, she is beautiful but her controversial lifestyle is not encouraging as a starter.

Charming Hannah Adejoke Olayinka is one of the beautiful babes rocking the scene in Abeokuta. Ajoke got into acting in 2011 with the Agunla caucus owned by Jimoh Olayemi before she later joined Senior Network Communications for further experience.

Adijat Adetola Uthman is also not relenting in giving her best. She got into acting in 2012 with Young Shall Grow Film Production owned by Dare Ogunnaike. Thereafter, she joined Future Concept Creative Art School to acquire more experience and skills which is now working for her. She is also hot and beautiful.

This beautiful lady came into acting in 2008 and she has been able to carved a niche for herself in the industry. Apart from acting, she was once a presenter with wave-making Yoruba television station (Orisun TV) presenting a programme called “Miliki Express”.

Sultry Pamilerinayo Abolaji Johnson better known as Pretty Princess is presently registering her name among other promising entertainers in Nigeria. She is a graduate of Yoruba Language at Tai Solarin University of Education, Ijebu Ode, Ogun State.

For Jumoke Olamide Odetola, she is a baby in the Yoruba movie genre of Nollywood but she has carved a niche for herself. She became a force to reckon with over the night via her dexterity in interpreting her movie roles. The talented star in the making, whose debut movie, Binta Ofege won Africa Magic Viewers’ Choice Award in the Best Indigenous Movie Category, has been the toast of many movie producers and directors in the industry since she delved into it in 2011.

Burna Boy Rated above Davido and Wizkid; Is he the greatest artist in Africa right now?

BBNaija 2019: “Diane Used Juju To Lengthen Her Stay In The House”- Bidemi Kosoko