Lawrence Anini aka The Law, in his time Nigeria recorded two types of armed robbers and they are Lawrence Nomanyagbon Anini and others. No armed robber has ever held the entire country on ransom as Anini. In fact, his reign was so bloody that he was even discussed at the State Security Council meeting.

Lawrence Anini was a notorious armed robber who terrorised residents of Old Bendel state (now Edo and Delta states) in the 80’s. Anini and his gang started out as car snatchers but graduated to robbing banks.

The son of the deadly armed robber, in person of Osayi Lawrence Lawson has finally replied those who labeled him as ‘someone who may be like his dad’, after he went public with his identity and background.

He’s finally decided to speak out after three decades of silence.

In a viral video, Osayi said he decided to speak because of people’s opinion about him for many years.

Osayi said anytime he goes out, people always pointed him out as ‘look at Anini’s son. That is Anini’s son.’ He said he was not hiding his identity and that he is proud of his father. Osayi who wore black and carried dread locks, said he wanted to use the video to clarify some things about his late father.

He lampooned Nollywood producers over the video of ‘Anini’ saying many things in the video were untrue. He said “His name is not Nomayankpon as stated in the movie. Anini is not an alias but my grandfather’s name. If I am walking, people always pointed me out saying ‘see Anini pikin.’ I was somewhere yesterday and people were saying many things about Anini.

“I am not hiding my identity. I have used that name to take the Nigeria government to court for years. I am proud of my father. If the way he runs things is not okey by you, that is your opinion but he is my father.

“We are two brothers. The other one is called Osaro. There is no need for people to be pointing out at me. My grandmother is still alive. I will release the true story of Anini by this month end. There is nothing real in that drama about Anini.”

However replying critics over the controversy his video generated, he wrote; “Am cool and calm very very different from what you think ask those that really know me.all sons are not always like their father” 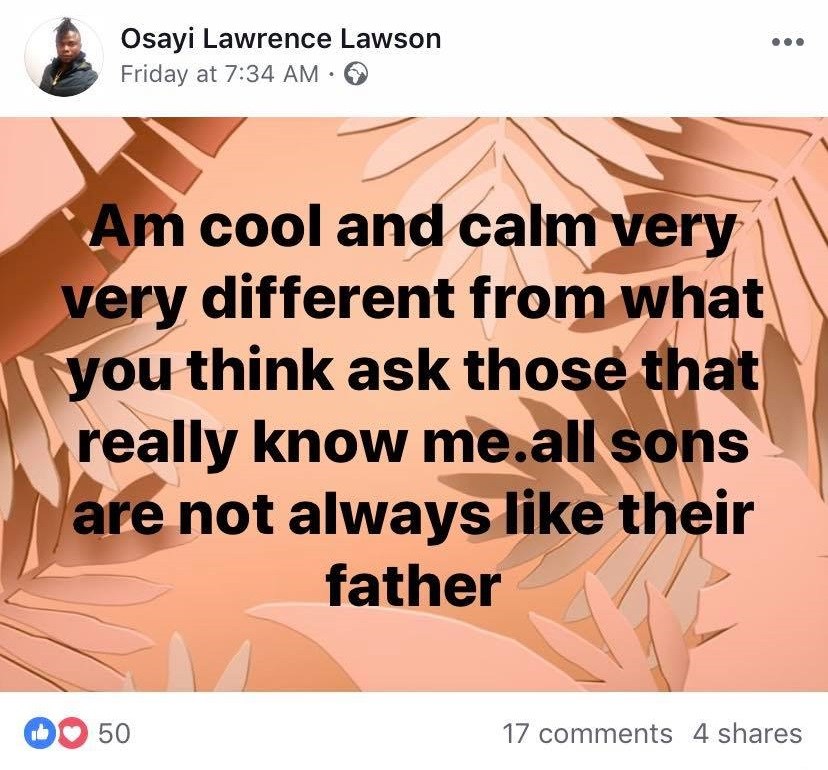