A 24-year-old Nigerian migrant is said to be in critical condition after he jumped from the fourth floor of a building during police chase in Vicenza, Italy.

It was gathered that the Nigerian man was stopped by the police for a routine check and on sighting the officers, the young man allegedly fled and was given a hot pursuit.

The Nigerian man ran into a building to hide from the police who were chasing him. After realizing that there was no escape for him, he allegedly jumped from the fourth floor of the building in a bid to evade arrest.

The Nigerian is said to be hospitalized and in a serious condition. A police officer was also injured due to a fall during the pursuit.
Accrording to reports, the Nigerian during the pursuit, threw away about 25 grams of marijuana he had with him before he allegedly jumped down from the building.

See excerpt from the report below. 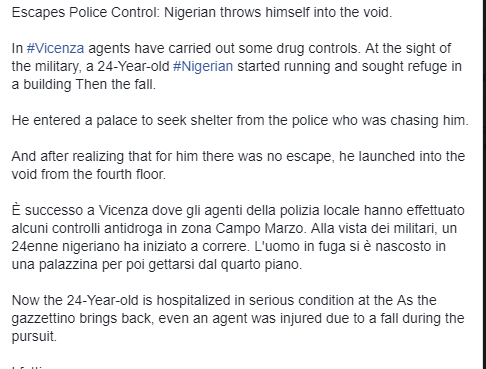