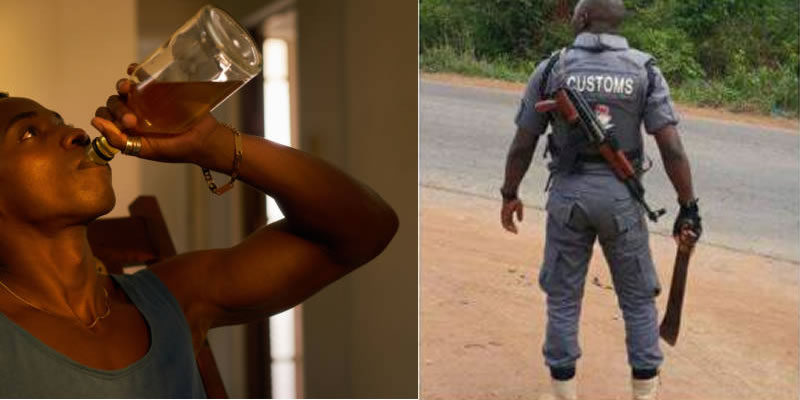 A custom officer reportedly stabbed a graduate on his stomach and leg following an argument at a popular relaxation centre in Yenagoa, the state capital.

The custom officer identified as Mr. Pereto Ayabowei is from Sagbama Local Government area of Bayelsa state, is said to be serving in Katsina State,.

The officer was allegedly under the influence of alcohol, the color of his tongue also indicated that his under influence of drugs  when he engaged in the act.

Trouble was said to have started when the bar attendant asked the suspect, who wanted to play the game of snooker, to book his turn.

But the angry suspect reportedly seized some of the snooker balls boasting that he would deal with anybody, who dared him in a military style.

Recounting the incident, an eyewitness, who spoke in confidence said: “We were playing snooker, when the suspect came. At first he was friendly with us.

“But we noticed his tongue was coloured blue and smelling of alcohol. He requested to play a set on the snooker board and he was told to pay and wait for his turn but he rather became agitated and seized the white ball.

“We pleaded for him to return the ball but he rather left us stranded on the board. That was all I know before we heard noise that he was killing someone”.

The victim, a graduate of River state polytechnic, identified as Mr. Anthony Amangala said: “I was only pleading with him to return the ball when he seized the other ball.

“We tried to talk to him because the people were waiting to play but he used the seized ball and hit my nose which made me bleed profusely.

“The people even told me to leave him and go get myself treated since I was bleeding and I had left him.

“But the next thing I heard was a loud shout from people telling me to run that he was coming with a dagger.

“I couldn’t run since he was close, and the next thing was a stab on my stomach.

“He brought it out after the first stab and wanted to stab again but I pushed his hands before he stabbed my leg.  If not for the people I would have been killed and left in my pool of blood.

“I was left unconscious on the floor and the next thing I woke to find myself in the hospital with severe pains.”

A close relation to the victim, who was at the clinic, said that the victim had been restless and prayed against internal bleeding.

The lawyer to the suspect, Nwanchukwu Peter, claimed it was a civil matter of two fighting, adding that his client wasn’t under the influence of alcohol but was only defending himself.

Man allegedly kills, buries wife in their kitchen in Bayelsa