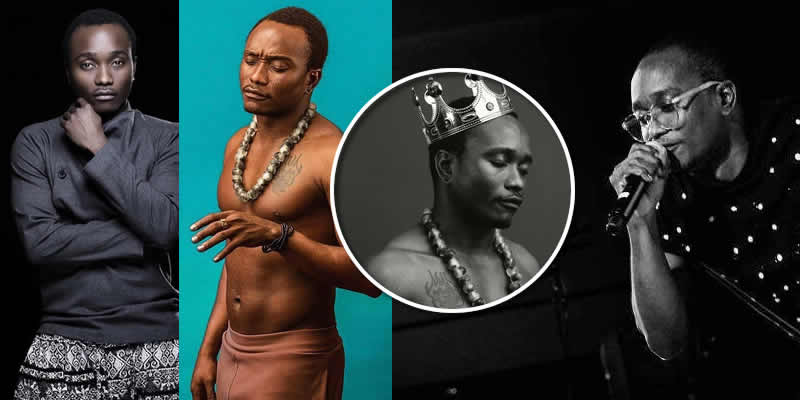 Brymo’s style of music dwells on controversies, addressing social injustice and chaos that are prevalent in Nigerian society

Self-crowned inventor of ‘Alternative Music’ in Nigeria, Brymo is one of the most controversial, yet artistic musicians in the West-African country. His music is a mixture of fuji, R&B, pop and rock.

Olawale Ashimi also Olawale Olofo’ro is popularly known as Brymo, he is a Nigerian singer, songwriter and composer. He was born on May 9, 1986 in Okokomaiko, Ojo, Lagos State, to an Awori carpenter father and an Egun petty trader mother. He is the only child of his parents.

Brymo attended his primary education at Aganju Aka Primary School between 1990 and 1997. Between 1997 and 2003, he attended Ajangbadi High School, a local public secondary school. He gained admission into Lagos State University to study zoology but had to drop out due to financial constraints.

In 1999, when he was 14, Brymo wrote his first song titled ‘Future’. Pleased with his results, the young Olawale was inspired to pursue a career in music. In 2002, Brymo and a few of his friends formed a group called The Aliens.

Between 2004 and 2005, the group started having problems and eventually disbanded in 2005. Brymo was enthused to create music after listening to his mother sing along to numerous fuji songs.

Brymo released his debut studio album ‘Brymstone’ in 2007, a R&B influenced by the works of R. Kelly and the Backstreet Boys. He sold more than 2,000 copies of the album within six months of its release.  Management problems prevented him from getting a marketing deal for the album after he secured a one-million naira offer that did not work out because of technical issues.

In 2010, Brymo received a call from Denrele Edun, whom he met few years earlier. Edun asked him if he knew M.I and told him that the rapper was interested in having a discussion with him. Later that year, Brymo got signed to Chocolate City after sitting down with M.I. prior to his record deal with Chocolate City, he collaborated with Jesse Jagz on the song “Love You” which appeared on the rapper’s debut studio album, Jag of All Tradez (2011).

Brymo was featured on the hit single “Oleku”, which was released as the lead single from Ice Prince’s debut studio album ‘Everybody Loves Ice Prince’ (2011). The track gave Brymo major exposure in the industry. He sai the chorus of the song which he rendered came from the passion and energy around him, and from hunger and desperation.

In 2012, Brymo dropped his second album ‘TheSonOfaKapenta’. The singer said his father’s carpentry profession inspired the album’s title and described ‘TheSonOfaKapenta’ as a summary of his life with each song reflecting his energy.

2013, Brymo announced his exit from Chocolate City, he wasn’t released by the label until 2014 after legal tussle.

Fast-forward to 2018, Brymo claimed he invented the ‘Alternative’ music genre in Nigeria with some explanations of what the genre means.

In the Nigerian music scene, the ‘alternative’ was invented by me in 2013 as a cure to the ills of the mainstream, not to be a part of it.. to be ‘alternative’ means that the process of recording, performing, distributing and rating your work is different from the mainstream..

‘Alternative’ is more than a genre here, it is a collective of Maverick artistes who have consistently refused to be part of the mediocrity the music industry has been known to dedicate itself to..

The ‘alternative’ scene has not yet evolved its own rating system, and musicians in that corner must learn patience, and yet must continue to blaze the trail. The mainstream learns the ethics of the business from us, we must keep the arrangement that way…

Brymo’s style of music dwells more on controversies, addressing social injustice, chaos that are prevalent in Nigerian society and many issues which are relevant in the societ. Below are major, but few of Brymo’s controversies.

In May 2013, Brymo announced via Twitter that he had left Chocolate City. But the CEO as at that time, Audu Maikori, rebutted Brymo’s claims during a press conference at the label’s office in Lekki. Maikori said Brymo still had three years left on his contract and still needed to record two albums. Vanguard newspaper reported that during the press conference, Maikori said Brymo committed an act of insubordination when he refused to remove an inappropriate picture he posted on Instagram.

While speaking to journalists in June 2013, Brymo said Chocolate City cheated him when the label failed to explain how his second studio album was leaked. He also said there was no accountability about the way his album was being sold and distributed.

Brymo signed a distribution deal with Spinlet in August 2013, enabling the digital media company to distribute his next album online. However, Spinlet discontinued the deal after Chocolate City made them aware of its existing contract with Brymo. On 14 October 2013, Chocolate City filed an interim injunction against Brymo, restraining him from partaking in musical ventures beyond the confines of his contract. Six days later, Brymo released his third studio album despite reports about the injunction. On October 21, a judge at the Federal High Court of Lagos restrained Brymo from releasing and distributing any musical work pending Chocolate City’s lawsuit against him.

In October 2013, Brymo and his management met with Chocolate City representatives in to discuss mutually-agreeable terms. Chocolate City asked Brymo to sign an agreement during the meeting, but failed.

Between December 2013 and March 2014, Chocolate City’s case against Brymo was adjourned four times for several reasons. In March 2014, the Federal High Court of Lagos lifted the restraint it put on Brymo in October 2013.

May 2014, it was reported that the judge presiding over the case pulled out after he was accused of being biased. In a radio interview with Toolz in May 2016, Brymo said he did not win the case against Chocolate City, saying, “we had the opportunity to iron it out in court but they fried it up. I don’t know what they did but they definitely spoke to the judge and spoke to the lawyers and scrapped the case, they are lawyers; they can do it.”

Explaining the concept behind the name and artwork in an interview with TheNetNg, he admitted that he intended for the album title to have a sensual feel.

“It’s a Greek word for ‘key’. It is where the word ‘clitoris’ itself originates.”

“This album is the key to a certain door I have knocked on for years; and yes it was meant to be sensual, there ought to be two sides to the coin”.

For the album cover, Brymo said, “It is art, some might find it to be creepy, but it is just art.”

“On the original artwork (designed in the United States), you could see all of the woman’s breasts.”

“An edit was done by here in after refused to put it up on the grounds that it’s pornography.”

“The artwork is an expression of how I love and how I am unsure of the woman, all at the same time”.

In 2018, Brymo dropped the visuals to ‘Heya’, one of the tracks off his Osó album. The singer wore what looks like a g-string while playing a piano and moving around. Some of his fans think its pure art and Brymo’s creativity is unmatched, others think its utter crap and Brymo should come back to reality.

Defending his choice for the music video, the singer said he was creating a picture that Africans are actually naked without the ‘superpower’ countries.

In March 2015, Brymo announced he welcomed a baby boy with his longtime girlfriend, Esse Kakada. “I have received the ultimate gift, welcome WAJU, welcome son!!!,” he wrote on twitter.