Zlatan Ibile is a Nigerian singer and rapper who rose to fame after his ‘Zanku’ dance made its way to the public.

Five days after Zlatan Ibile, also known as ‘Zlatan’ was arrested on Friday morning, May 10, 2019 alongside Naira Marley, Rahman Jago and two others, the popular Zanku crooner regained partial freedom from the Economic and Financial Crimes Commission (EFCC).

Zlatan Ibile and others were freed on bail, but they have to keep reporting at the EFCC’s Lagos office every day, until the case is over. While Naira Marley is still in custody.

Before his arrest, Zlatan was gradually becoming popular due to his ‘Zanku’ dance steps that flooded the streets. Fans became more curious, wanting to know more about him following his arrest last week and these are few things to know about the ‘Killin Dem’ singer.

1.  Zlatan was a church boy, he used to play drums and had a knowledge of music. Upon finishing his SSCE in 2011, he was jobless and started following his friends to the music studio where he ultimately developed interest for music.

2. Zlatan Ibile is a Moshood Abiola Polytechnic graduate. He holds HND in Business Administration from the institution.

3. He won a talent hunt at age 19. While in school, the singer participated and won the Airtel-sponsored ‘One Mic Campus Tour’ talent quest due to his captivating performance that wowed the judges.

4.  Zlatan’s first taste of fame was when his decision to support a young internet sensation, Segun Wire, who openly confessed his intention to become an internet fraudster when he grows up, went viral. This move was latter regretted by Zlatan and he withdrew his support for the young lad.

In his words; “If you help someone and you got beaten for it, why won’t you regret it? Before withdrawing my support for Segun, I thought about it thoroughly and I am not happy I took such a decision. Once you mean well and people don’t appreciate it, it becomes hard for you to help others. But I don’t think I will stop helping people generally. I will only be more careful when helping others because I have learnt my lessons.”

5.  His real name is Temidayo Omoniyi Raphael, born on November 28, 1995 in Lagos state, but hails from Osun State, Nigeria.

6.  Zlatan made his first one million views on Instagram via DMW label boss, Davido was recorded  dancing to Zlatan’s song. The video went viral and exposed Zlatan to larger audience.

7.  Zlatan put an end to the popular ‘Shaku Shaku’ dance with his ‘Zanku (Leg Work)’ dance that was solidified by Chinko Ekun’s ‘Able God’ track which featured Lil Kesh and Zlatan himself.

8.  On November 29, 2018, Trace TV unlocked the puzzle behind the meaning of ‘ZANKU’. The official twitter page of the respected media house tweeted ‘Zlatan Abeg No Kill Us’ to be the meaning of the then mystery, Zanku’. 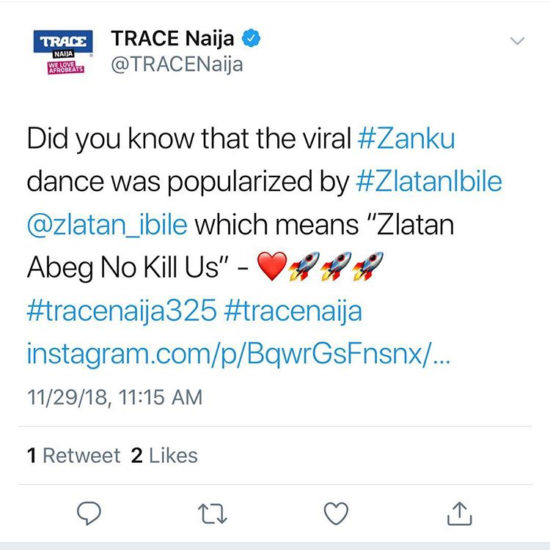 9.   The singer who doubles as a rapper is also famed for his ‘Kapaichumarimarichopaco’ slang which was reportedly adopted from a popular late-2000s skit where a young man desperate for quick, easy money was beaten by two conmen pretending to be native spiritualists.

10.  He’s a suspected fraudster who remains guilty until proven innocent. He arrested by the men of the EFCC in connection to internet fraud better known as “Yahoo” on May 10, 2019.

10 International Collaborations By Davido So Far