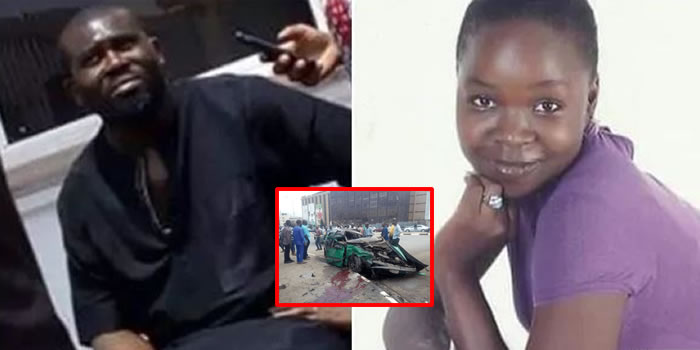 A Nigerian lady has sought justice for the life of her sister who was killed after a doctor who was driving under the influence and was struggling with a sex worker in his car, rammed into another vehicle which had her sister in it.

The lady, Oluwatoyin Douglas stated that driver who caused the death of her sister, left his wife and hooked up with a prostitute – she then reveals that the said doctor allegedly refused to pay the sex worker as agreed and this led to her dragging the steering wheel of his car with him as he drove.

The car ended up hitting another vehicle and innocent lives were lost, including Toyin’s sister Saratu Luga Mbaka.

Photos she shared from the scene shows a green car completely wrecked with blood spilling from it and pooling on the road and pavement.

Toyin took to her Facebook page to demand justice for her sister and others who were killed in the fatal accident.

“This is the man that killed my sister. Manslaughter of my sister. An incident that would have been avoided if he stays with his wife. A drunk doctor who kill because a prostitute he refused to settle drag the wheel with him leading to hit and run and killing innocent people on their way to work. Nigerians please I seek justice for my sister Saratu Luga Mbaka. this man should be tried in the court of law and justice be serve for the life of my sister and the other occupants of the cab. Justice must prevail. Help seek for justice please.”

“9-year-old dwarf, Quaden Bayles is being used by his mum to make money”,…