Singer, Davido has put party differences aside to remember a late friend by performing at the inauguration ceremony of an APC governor, Dapo Abiodun.

Judging from Davido’s campaign for People’s Democratic Party, PDP on both social media and real life events, one will say he is the last person to be seen at an APC organized event. However, Davido has chosen friendship over Political Party as the singer was not only spotted but performed at Ogun APC inauguration party.

Dapo Abiodun who was sworn-in as the new governor of Ogun State is the father of Davido’s late friend DJ Olu who died mysteriously two years ago.

Davido, a staunch supporter of the Peoples Democratic Party, PDP, whom many have rumored to be a card carrying member, decided to put aside political differences to honor the father of his late friend DJ Olu.

The singer was on ground yesterday to perform at the inauguration ceremony of the new governor of Ogun State, Dapo Abiodun. 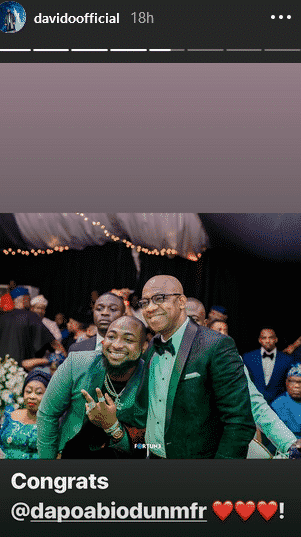 Osinbajo thanks Saraki for not ‘doing anything funny’ before inauguration

Photos from the Presidential Inauguration State banquet in Abuja