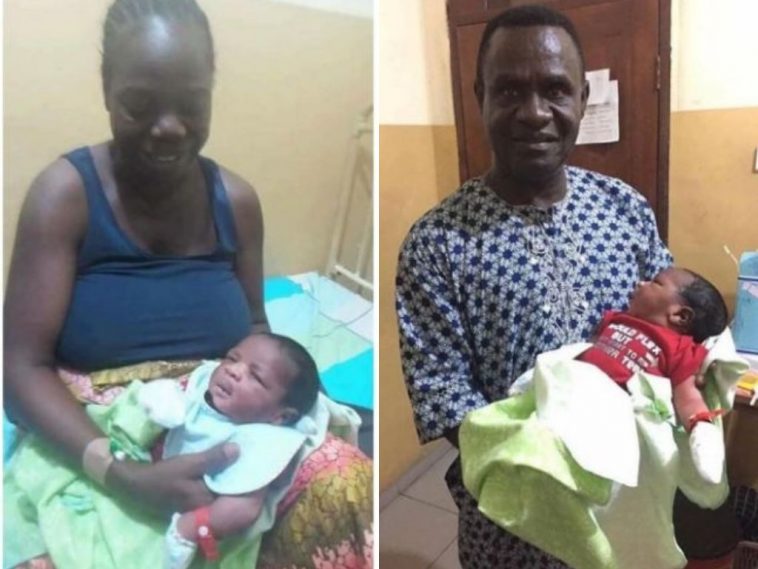 A 62-year-old man and his wife, 57-year-old Deaconess Owoade, have welcomed their first child together after waiting for so long.

The pictures show the couple on their wedding day and also at the hospital where they welcomed their bundle of joy.

This is coming about a month after a Nigerian woman who was called a witch for being barren, has reportedly given birth to a bouncing baby just some few days ago.

The woman identified as Ugo Treasure was a member of a Facebook group chat and had a misunderstanding with the admin of the group, who mocked her and tagged a witch for not having a child of her own yet, unlike other members of the group chat.

According to one Ijeoma on Facebook, who shared the story, Ugo has given birth to her own child and she is so full of excitement.

Congratulations to Ugo Treasure Mathson Onyemaobi, on your safe delivery to a bouncing baby girl. I am extremely happy for her .
Now let me tell you the story of Ugo Treasure (Evidence are those screenshot attached to this post)

Ugo treasure was insulted by her fellow woman on this Facebook by name #Onweremadu_Jane who now changed her name to #Okoroafor_jane, onweremadu called her a woman man , barren, witch, a cursed wife etc , even told her that soon , her husband will marry another wife, she insulted her all because she havnt given birth yet.

(Seriously my people, keep your secret to yourself, people are not always the way they appear here) Ugo treasure left heart broken, she never expected such from a fellow who claims to be praying for them. Today God visited her with her own child .