by Ashimedua Adebiyi
in Metro
Reading Time: 2 mins read
0 0
A A
0

Weeks after he was declared missing, a man with hunchback has been found dead in a suspected case of ritual killing.

Kogi politician, Natasha Akpoti had taken to Facebook two days after his kidnap to share a “missing person” post, begging the public to reach out if they have information that could lead to his rescue.

She explained at the time that he was “abducted by gunmen in a black SUV while waiting to cross the road leading to Oride mosque, beside St. Paul’s Church Obeiba, Ihima.” 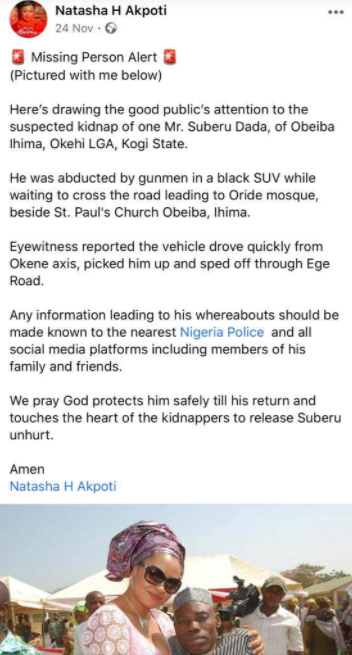 Well-wishers prayed for his safe return. Sadly, that was not to be.

It is suspected that Suberu Dada was murdered for ritual purposes because of his hunchback.

His death comes years after Nigerian hunchbacks cried out that their lives are endangered because of the belief that their condition makes them potent for rituals.

“The fear of being kidnapped for money rituals is greater than the shame of being a hunchback,” Saheed Oyedokun, who lives with hunchback, said in 2014, adding: “Using hunchbacks for money-making rituals is common. How many hunchbacks do you see around these days? They seem to have been driven underground by the evildoers.”

Years ago Adeoye Dowo, a 22-year-old with a hunchback, was murdered after his female friend lured him into a bush at Ago Alaye, in Odigbo Local Government Area in Ondo State. He was strangulated and his hump removed by three men.

Taibatu Oseni, also 22, suffered same fate. She was killed and the hunch on her back was removed by her murderers.