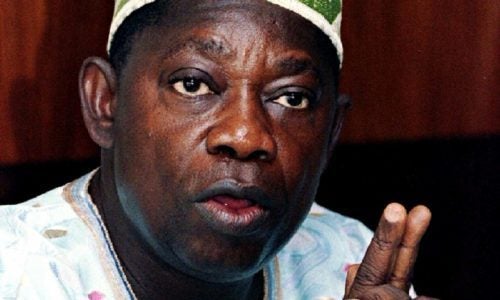 Buhari made the remark during the 2019 Democracy Day Address at the Eagles Square, Abuja.

Abiola had run for the presidency in 1993, but the election results were annulled by former military President, Ibrahim Babangida.

Buhari, on the 6th of June 2018 had also awarded Abiola posthumously with Grand Commander of the Federal Republic (GCFR), meant only for Presidents.

Buhari on Wednesday also said that Nigeria has all it takes to become a world power.

According to him, Nigeria only needs to get his acts together.

He was optimistic that Nigeria can do it since nations like China, India and Indonesian achieved the feat.

“Nigeria can do it.” Buhari declared.

He noted that his administration has made remarkable progress in the fight against corruption, improving economy and securing the nation in the past four years.

Buhari also assured that his administration in the next four years will consolidate on the achievements recorded in the past four years.

Stressing that the Federal Government cannot develop the nation alone, he urged state governments and the private sector to play their own part.

He insisted that Nigeria’s future and unity is unshakable.

The President said that his administration will not tolerate any form of attack and violence against Nigerians in any part of the country.

“Join me in this journey of rebuilding our nation.” he said.