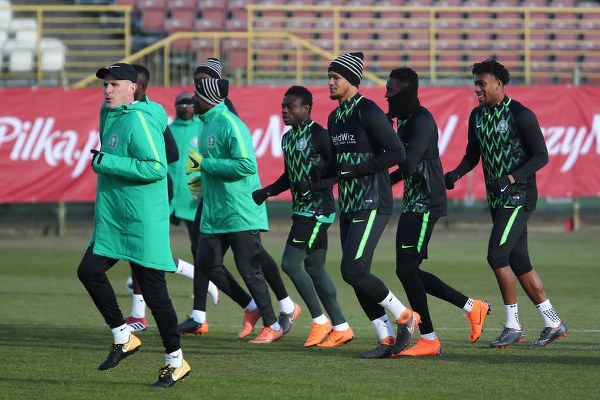 Nigeria’s Super Eagles will adopt a 3-5-2 formation in Sunday’s pre- 2019 Africa Cup of Nations friendly encounter against the Terangha Lions of Senegal at the Ismaila, Stadium, Completesports.com reports.

The three-time time champions played a 4-4-2 formation in last Saturday’s friendly clash against the Warriors of Zimbabwe at the Stephen Keshi Stadium, Asaba which ended in a goalless draw.

Head coach of the side is however prepared to change his formation against the Senegalese who are one of the favourites to win the competition.

The Super Eagles lined-up in the same formation in their penultimate AFCON 2019 qualifying game against the Bafana Bafana of South in Johannesburg which ended in a 1-1 draw.

The trio of Leon Balogun, William Troost-Ekong and Kenneth Omeruo are expected to occupy the three centre-back positions in the formation, while Jamilu Collins will feature in the left wing-back position.

It however remain to be seen who will play at right wing-back position amongst the trio of Samuel Kalu, Ola Aina and Shehu Abdullahi.

Nigeria are in Group B of the showpiece and they will begin their campaign for a fourth Afcon title against Burundi at the Alexandria Stadium on June 22.