Former BBNaija housemate, Khloe went to her IG page to lament about her morning mood. She wrote

Am I the only one that wakes up restless and angry?

If not, pls can anyone explain the reasons and how to feel better.

An IG user went on to advise her to stop smoking  marijuana “weed”. The troll’s respose further  heightened the former BBNaija housemate mood.

Koko was very angry with the troll who mocked her and her fellow ex-BBN housemate, Teddy A, on IG. See the complete chat between the troll and Khloe 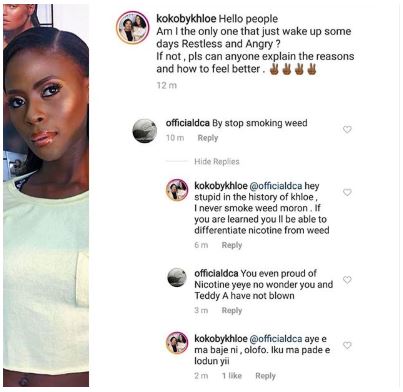 In another post we saw the former bbnaija star swearing never to use an Uber again, claiming that Uber drivers are rude and ill mannered.