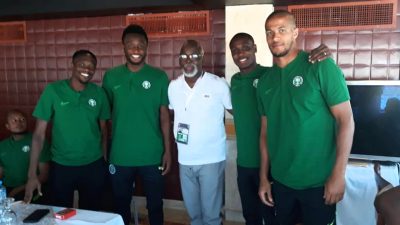 President of the Nigeria Football Federation, Amaju Pinnick, has challenged the Super Eagles to stay focused on winning a fourth Africa Cup of Nations to title in Egypt.

The Super Eagles arrived in into Egypt’s second largest city, Alexandria on Monday evening as the countdown to the 32nd Africa Cup of Nations hit the home stretch.

Pinnick visited the team during their first training session at the Arab Academy for Science, Technlogy and Maritime Transport in the port city on Tuesday and tasked the players to bring the the trophy home.

“Do not take any team for granted. Easy groups exist only on paper; things are different on the pitch. The NFF will ensure you get all that is due to you. This is a very important tournament and Nigerians are fully behind you. You should do your very best not to disappoint them,” Pinnick was quoted by NFF.com.

“The NFF is happy about the situation in camp; the commitment, discipline and dedication of each and everyone of you. You have all the quality of a champion team and everything about you is positive.”

Responding, Captain Mikel John Obi thanked Pinnick for exemplary care for the national team and promised that the three–time African champions will be very professional on and off the pitch and do all they can to make the country proud.

“Mr. President, we thank you for all that you have done for this team over the years, as the head of Nigerian Football. We appreciate your honest approach to all issues that concern our welfare.

“We all are aware of what is at stake. This tournament will not be child’s play or a stroll in the park, but we are ready. It will be tough but when it gets tough, we will get tougher.”

The Super Eagles will start their Group A campaign against the Swallows of Burundi on Saturday June 22 in Alexandria. They will clash with the Syli Nationale of Guinea on June 26 before confronting the Barea of Madagascar in their last group game on June 30.