It appears Nigerian singer, D’Prince, may have created a reputation for himself amongst some ladies in Abuja and it doesn’t seem to look good.

Nollywood actress, Cassy Nze has called for the arrest of Don Jazzy’s artistes, DPrince and Rema for allegedly abusing an underage girl.

The actress is reacting to allegations by Samantha that D’prince and Rema’s manager had fun with her friends and they refused to pay after the action.

According to the lady, D’Prince alonside fellow Mavin fast rising singer, Rema and another person identified simply as Cris, spent the night with her friends and refused to pay them. Even though she revealed nothing intimate happened between the girls and the guys, she insisted that the men should have paid them and not treated them like prostitutes.

Cassy Nze has warned people to stop chilling with broke celebrities. She revealed that most Nigerian celebrities are broke.

She also called for the arrest of Mavin acts, DPrince and Rema for flirting with an underaged lady after revealing the girl is under 18. 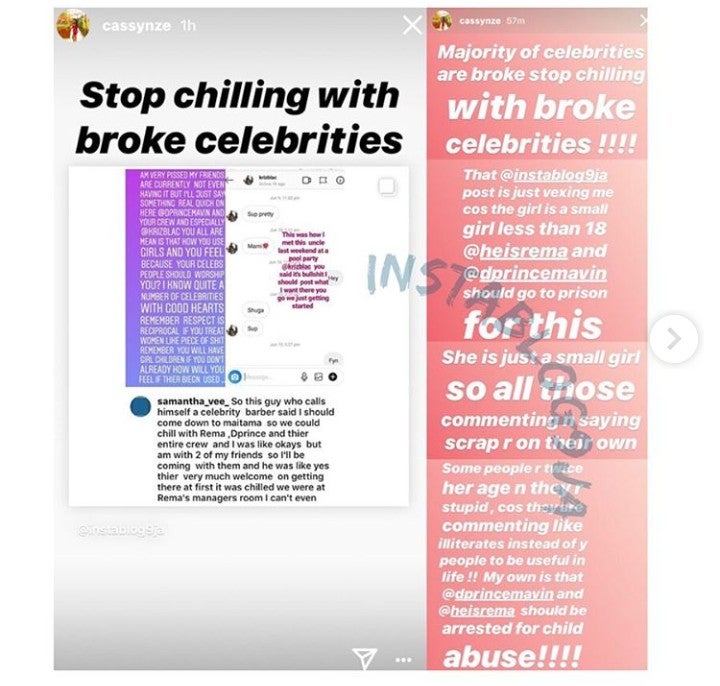 Neither fast rising singer, Rema nor D’prince, who hasn’t been on the music scene for a while now, has responded to the allegations.