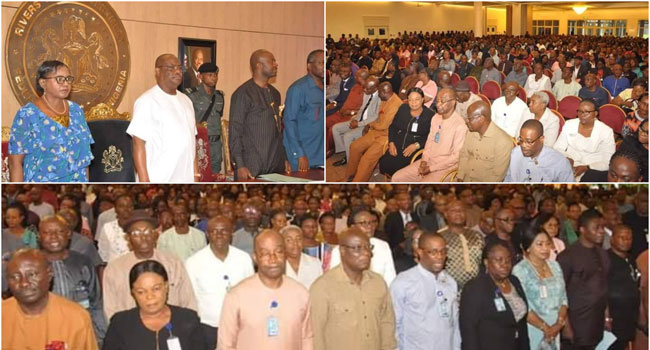 In a bid to create access to quality education, Rivers State Governor, Nyesom Ezenwo Wike has announced the total abolition of all forms of fees and levies in public primary and secondary schools across the state.

Governor Wike stated that henceforth the State Government will be sending direct allocations to all primary and secondary schools management for their operations.

He spoke on Monday during a meeting with the heads of primary and secondary schools, Rivers State Senior Secondary Schools Board and State Universal Basic Education Board at the Government House Port Harcourt.

He said: “From today henceforth, no child either in primary and secondary schools should pay fees and levies in any school across the State.

“The monies you collect from these children are just used for your personal purposes. If I hear that any school head collects any fees or levies, be they examination, NECO or WAEC fees, that school head would be sanctioned.

“We shall not only dismiss the school head who collects fees or levies, but we will also prosecute the person involved.

“Government will work out grants that will be sent to the schools for their regular management and operations “.

Governor Wike directed the State Ministry of Education, the Rivers State Senior Secondary Schools Board and the State Universal Basic Education Board to monitor all public schools across the state to ensure compliance.

The Governor noted that the administration funds the salaries, allowances, examinations and equipment of all public schools. He assured parents that his administration will remain committed to the provision of quality education, which is accessible to the less privileged.

“I have abolished all fees and levies and it will never happen again in our public primary and Secondary schools. Nobody should collect fees and levies from the children of the less privileged “, he said.

The school heads celebrated the new directive of the Rivers State Governor.