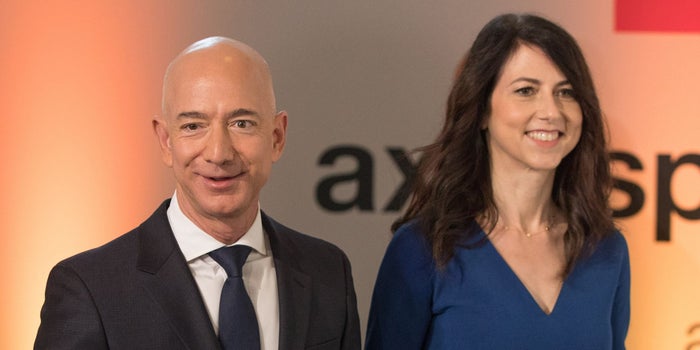 Amazon CEO, Jeff Bezos divorce from his ex-wife Mackenzie has been finalized and filed on Friday in King County, Washington.

Amazon Boss Jeff Bezos and his ex-wife, Mackenzie were married for over 25 years and separated for about 6 months before finally formalizing their divorce.

According to Bloomberg, a Washington state judge signed the order on Friday, part of the settlement includes that MacKenzie Bezos, 49, will receive 4 percent of outstanding common stock of Amazon.com, Inc., the most valuable corporation on the planet. She is due to start receiving nearly 20 million Amazon shares, a stake which is worth nearly $38 billion.

The settlement has however catapulted her to the 22nd place on the list of the world’s richest people and the third-wealthiest woman. Her ex-husband Jeff Bezos remains the world richest man.

Jeff Bezos will keep most of the couple’s shares, representing roughly 12 percent of Amazon’s shares, equal to around $114.8 billion. He will remain the company’s biggest shareholder.

MacKenzie Bezos, an award-winning novelist, has also already pledged to give at least half of her fortune to charity and also agreed to give all of her interests in the Washington Post and Blue Origin to Jeff.

The former couple, who have four children together – three sons, and one daughter adopted from China – had been married since 1993, even before Jeff Bezos set up Amazon, with his ex-wife employed as one of the firm’s first employees.

They announced they were parting ways in January, and reports soon followed that Bezos was having an extramarital relationship with former Fox TV news anchor and helicopter pilot Lauren Sanchez.

CAN expresses concern over rape allegations against COZA pastor

Oluwo of Iwo reacts to issues surrounding his divorce, says God should remove his…

Today would have been my 8th wedding anniversary – Gospel singer, Nikki Laoye…