Conservationists have been quite fascinated after discovering a two-headed turtle on Mabul Island, off the Malaysian part of Borneo.

The two-headed turtle which only survived a few days after being discovered, was found in a nest alongside more than 90 other recently hatched green turtles on July 15.

“The right head seems to control the front right flipper, and the left head the front left flipper. Yet they are capable of coordinating their movements in order to walk and swim.”

“We have released around 13,000 hatchlings from the hatchery and have never seen anything like this before,” SJ SEAS chairman Mohamad Khairuddin Riman added. 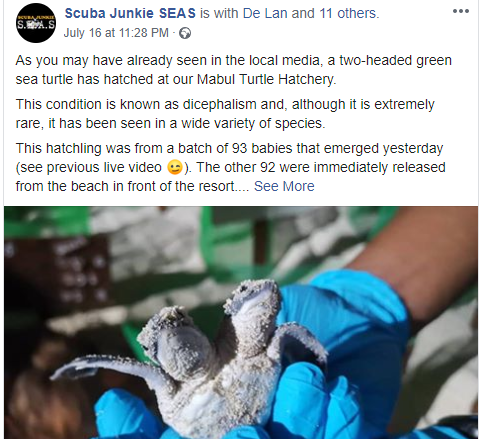 Dicephalism is a rare form of partial twinning where there are two heads on the torso. The last time a dicephalic turtle was found was in Redang, Terengganu in 2014.

Fasoranti’s daughter, Funke Olakunrin, to be buried on July 22nd

Nigeria is building a generation of illiterates – Wole Soyinka

Omotola steps out in style with her daughter, Princess (Photos)

My Chief of Staff is trustworthy, says Ganduje

The rise of bleaching In Nollywood Yoruba Industry