Funke Akindele in her Instagram shout-out to Kate Henshaw on her 48th birthday, took a long walk back as she recounted their first meeting in 1997.

According to Funke Akindele, she first met Kate Henshaw on the set of ‘Naked Wire’ which was also her first experience before the camera. She, however, couldn’t get food even though she was quite hungry until Kate stepped in.

I’m sure @k8henshaw can’t remember the story I’m about to tell…… In 1997 when I started my acting career I met @k8henshaw on the set of Naked Wire. That was my first experience before the camera so I was so nervous. I played the role of a waitress who was asked by the lead actor to tell the lead actress (Kate Henshaw) that he loved her. Immediately the director called ACTION, I started shaking because I was so nervous. Kate held my hands and told me that I could do it.
After the scene, I was so hungry but wasn’t given food as (waka pass concern nau ) Kate saw me waiting and she went to tell them to give me food.

Between Osun Deputy Governor, Akin Adeyi and the ‘second… 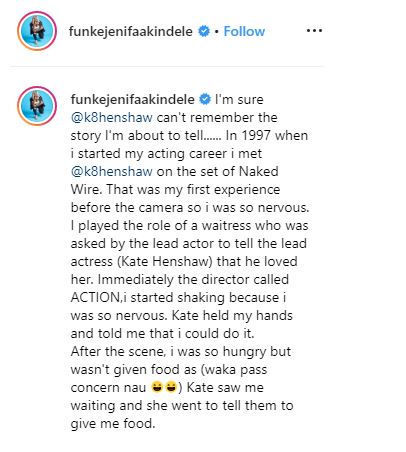 Kate Henshaw calls out women who use bleaching cream on babies