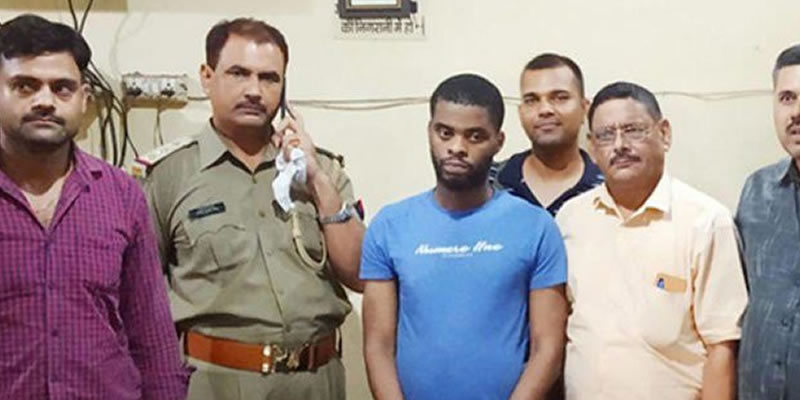 A Nigerian national was arrested from DLF phase III of Gurugram in Haryana by a cyber cell team of inspector general of police (IG), Agra range, on Tuesday, July 16, on charges of duping an Agra-based official of the food processing department of Rs 32 lakh.

According to police, the accused, Andrew Daniel, identified himself to the victim as Dr Edyon, process manager of a US-based pharmaceuticals company that manufactures medicines for animals and supplies steroids to owners of horse riding clubs.

The accused lured the victim to become a business partner and invest money into buying fake medicines from ‘fake companies’ by promising huge profits.

“The accused used to send text messages to people’s phone numbers, offering partnership in steroid export business and promising huge profits. Once a victim falls in their net, the gang members would pose as representatives of the US firm and win confidence of the victim before asking him to buy a sample of ‘fake steroid’ from ‘fake’ Indian pharmaceutical companies for export. After testing the sample, the representatives would promise to offer a much higher price for the steroid to keep the victim interested in the deal.

Later, they would ask the victim to buy the ‘steroid’ in large quantities from the so-called companies.

Thinking that the deal would bring huge profits, their victim would jump into the trap. Once the victim buys the fake steroid by paying huge sums of money, the gang members would vanish. They would charge Rs 6 lakh for 1 litre of steroid,” said Vishal Sharma, sub-inspector of IG cyber cell.

Woman lawyer gets life imprisonment for strangulating husband with…

“We arrested Daniel in presence of his girlfriend Peggy Morrison on Tuesday and recovered laptops and mobile phones which contains data of their victims. The members of the gang are spread across several Indian states such as Maharashtra (Mumbai), Rajasthan (Pali), Gurugram (Haryana), Delhi, etc. They have also opened several bank accounts on forged papers and operate ‘ghost’ pharmaceutical companies to dupe their victims. On an average, the gang would extract at least Rs 20 lakh from each victim and would distribute the booty among themselves, with 40% going to Daniel, 20% to Indian associates involved and the rest 40% to a Mumbai-based African national,” said inspector Shailesh Kumar Singh, who heads the IG cyber cell.”

However, some sources said the Mumbai-based gang member is believed to be one Steve, a national of Ghana, who was arrested by Ahmedabad police recently in a similar case of cyber fraud.

Speaking to TOI, Awadh Narayan, the officer of the food processing department who was duped in August 2018 of Rs 32 lakh by the cyber gang, said,

“I have to mortgage my house and am currently paying Rs 32,000 per month as EMI to return the Rs 30 lakh loan that I took from bank and colleagues to buy six litres of steroid from a Mumbai-based pharmaceutical company. I deposited the amount in some bank accounts as asked by Dr Edyon, alias Andrew Daniel, but never received anything from the pharmaceutical firm. Later, Edyon’s phone number too became unreachable.”

“I had first received an SMS in 2018 in which the gang offered me a lucrative deal if I joined the business of exporting steroid. The fraudsters also promised me 50% commission from the deal,” added Narayan.