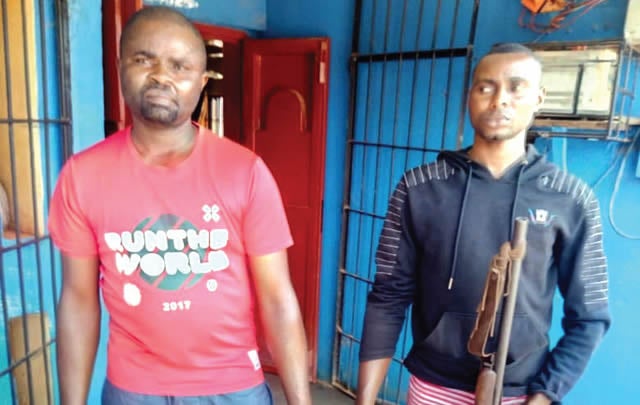 The names of the suspects were given as Dubem Okeke, 28, and Okechukwu Okafor, 37.

A source, who pleaded not to be named told newsmen that Dubem,who was in love with one Ifenyichukwu Kamsisichukwu procured the assistance of Okechukwu to perpetrate the act.

“What really happened was that Dubem was in love with Kamsisichukwu.

“But there was suspicion that Kamsisichukwu was in love with the deceased. So when Dubem learnt that the deceased was in Kamsi’s house, he went there in the company of Okechukwu and forced the room they were in open and attacked them with a gun.

“Before neighbours could intervene, the damage had been done”, the source stated.

Confirming the report to our correspondent, the Police Public Relations Officer in the state, Haruna Mohammed said the incident happened around 7:00 a.m. on Friday at Umuru village, Ogidi.

He said the suspects “stormed the house of one Ifenyichukwu Kamsisichukwu, 20, forced her to open her door and took away her boyfriend, one Chinedu Okoye, 24 years of Umuru Village Ogidi and shot him with a gun.

He added, “Scene was visited and the victim, who sustained a gunshot injury on the back was rushed to Twinkle Hospital, Ogidi for medical attention. He was certified dead by a medical doctor while receiving treatment.

He said the victim’s corpse had been deposited at Iyienu Hospital morgue Ogidi for autopsy.

Mohammed added that preliminary investigation revealed that the principal suspect, Dubem Okoye who allegedly pulled the trigger was said to have been at loggerhead with the deceased over a girlfriend.

He said the single barrel gun allegedly used in perpetrating the act was recovered from the suspects as exhibits.

He said the suspects would be prosecuted after investigations.

Coronavirus: Mongolian president placed under quarantine after returning from China

Atiku Advises FG On How To Tackle Coronavirus