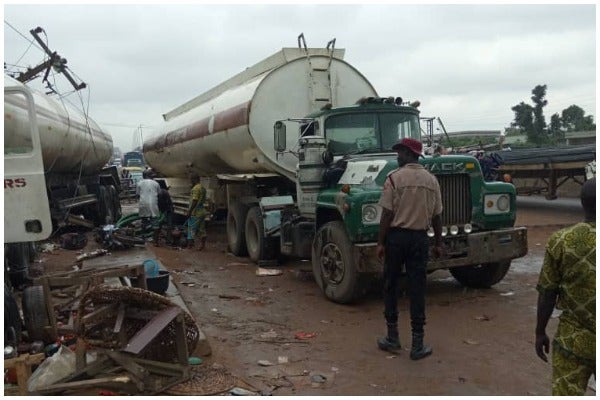 Two persons have been confirmed dead in two separate accidents that occurred on Saturday in different parts of Ogun State.

The accidents were reportedly caused by two different trucks and led to the death of the driver of a maize-loaded commercial bus and a commercial motorcycle rider, popularly called Okada.

Both the Federal Road Safety Corps and Traffic Compliance and Enforcement Corps in the state confirmed the two incidents.

Akinbiyi also said the motorcyclist met his untimely death when a loaded fuel tanker suffered a brake failure and hit the Okada man at Joju along Lagos/Abeokuta Road.

In his account, the state sector commander of FRSC, Clement Oladele said, the crash that occurred around Joju area of the state along the Lagos-Ota-Abeokuta Expressway involved a tanker laden with PMS, an SUV and a motorcycle led to the loss of one person while another person was injured.

Oladele in his statement said the injured person had been taken to the hospital for medical treatment while the corpse of the dead person was still trapped under the tanker.

According to him, the retrieval of the corpse is challenged due to the possibility of a fire outbreak.

“Men of the fire service have been contacted, as standard practice, before transloading to avert fire outbreak.”

He said, as soon as transloading is completed, the vehicle would be removed from the road.

“Motorists are advised to be patient until the crashed vehicle is removed from the road.

“Meanwhile alternative corridor of the Lagos-Ibadan Expressway may be used,” said Oladele.

Ministerial List: Why Buhari must submit nominees in five days