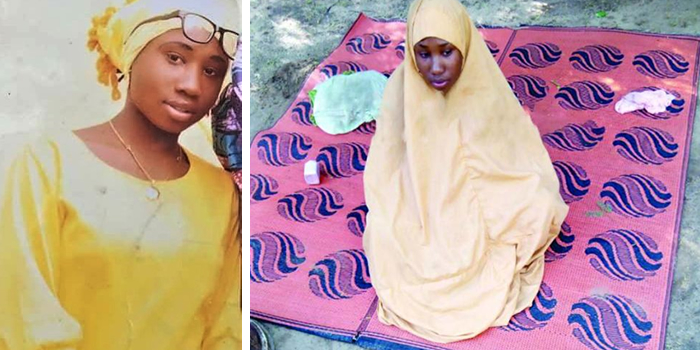 ECWA President said this in a chat with newsmen on Saturday, in Lagos.

In the video, Grace was seen begging the Nigerian government to assist in facilitating their release from the Boko Haram enclave.

She then adds that Leah, one of the Dapchi schoolgirls that were kidnapped by the terrorists, had been killed.

According to her, Leah was killed because the federal government could not ‘do something’.

He said: “We all know Leah Sharibu was among the 110 Dapchi schoolgirl kidnapped from Yobe State on February 19, 2018.

“The other girl, Alice Loksha, was abducted while providing humanitarian service in Borno State.

“These young women unfortunately are my church members. We have continued to pray to God and appeal to government to negotiate for their release but up till now, nothing has been done”.

“Sadly, grace, the lady along with some men who were recently shown in a trending video has been added to the unfortunate narrative.

“These are aside the remaining Chibok Christian School girls still held in captivity. We are confident that Leah Sharibu is alive.”

“At this moment we are not in the position to confirm whether she is alive or dead. But we are praying and still trusting God that Leah is alive and that by God mercy and his glory, Leah will be returned to us.”

He also urged the Federal government to ensure the security challenges bedeviling the country are tackled to return the country to path of orderliness and peace by ensuring the strict adherence to the principles of equity and justice for all.

The cleric further advised Nigerians to avoid ethnic and religious profiling of criminals.