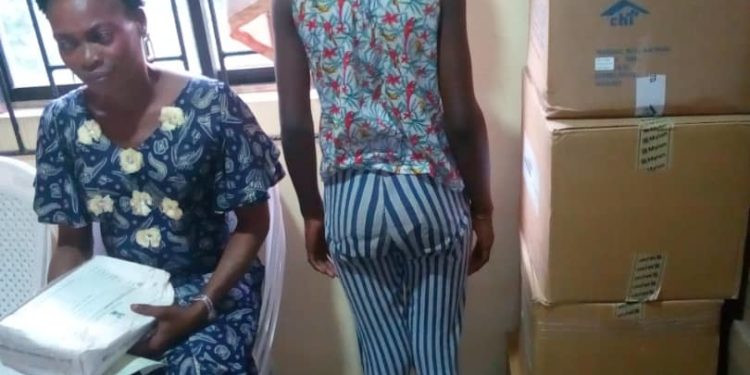 A 14 year-old girl residing in Ikorodu, Lagos state, has recounted how she was brutally raped at knife-point by a man simply identified as Dolapo, in a house at Fajemisi Kokoro Abu Street in Sabo, Ikorodu area of Lagos State on Monday August 5th.

According to Nation reports that the victim, who is an apprentice with a salon, said she had left the salon to buy food for her boss when the incident happened .

On her way back to the salon, she was accosted by Dolapo who works at a gas operator shop on Fajemisi Koro Abu Street in Sabo, Ikorodu.

“I was coming from where I bought rice for my boss when the incident happened, I was heading back to the Salon when Dolapo called me to come but I did not answer him because I don’t know him. He then crossed my path by a house that is at a corner on Fajemisi Kokoro Abu Street in Sabo, Ikorodu and pushed me. He lifted up his yellow top, brought out knife and tied my mouth with cloth. He pushed me on the floor, dragged me to a room and said if I move, he will kill me and run away.

“He dragged me to the bed, removed my cloths, slept with me and afterwards I got dis-virgin. He removed his yellow top and used it to clean my blood; he opened the door and ran out with the cloth. I went out of the room and shouted, people came around, and some chased after him but did not find him. A woman took me to my boss shop; I was given some drug and shewbs. My mother later joined us and we went to report the incident at Igbogbo police station, then later went to the hospital.” the victim said.

Reacting to the unfortunate incident, the mother of the victim who simply identified herself as Monsura, said her daughter has three cuts on her private part because Dolapo forced himself on her.

“He dragged her, pushed her on the wall and brought out knife. When she came out of that room, there was sand all over her body. As she is with me, she is not well, she is not fine and she is not comfortable. She has since Monday been bathing with hot water and she cannot do anything by herself. If you see her, you will pity her, she has been wearing cardigan up and down since Monday and covering up herself with bed sheet. “We took her to the General hospital in Itelewa, she was given medications and did several tests including HIV. The doctors said he has damaged her badly and that she has three cuts in her private part. If I had power, I would make them carry the man Dolapo lives with, his parents and the owner of the gas shop. If all these people are arrested, Dolapo will appear.”Monsurat said

The distraught mum says he greatest fear is what Dolapo might have gone to do with the cloth containing her daughter’s blood.

“Of major concern to me now is that Dolapo dis-virgin my daughter, cleaned her blood with cloth and went with the cloth. I’m concerned about the cloth with blood taken because of what is going on now in the country. Some people said they use it for money rituals; they said they sell it to the rich people to do blood ritual and that the blood of their victim gets dry and the person will not be ok. I have been to our Alfa to help her to be well. I don’t know what will happen to my daughter anytime soon because she is in pains now.” she said

Confirming the incident, the spokesperson of the Lagos state police command, Bala Elkana, said the matter is being investigated.