Daily, celebrities are victims of impostors and fraud but Nollywood actor, Michael Godson Ifeanyichukwu has decided not to keep mute about it but take necessary action after an incident happened.

The actor has reacted to a photo making the rounds online of him naked, which is been used to defraud women. He vowed to deal with the fraudster using his picture on social media to defraud innocent people. Michael took to his Instagram page to post the photo and rant about it.

He also captioned it thus:

“Some one created a fake n##de Photoshoped picture with my head on it, using it to defraud women. This is the height of stupidity. Who ever you are, shame on you. I’ll catch you soon I promise! and it will be my turn.” 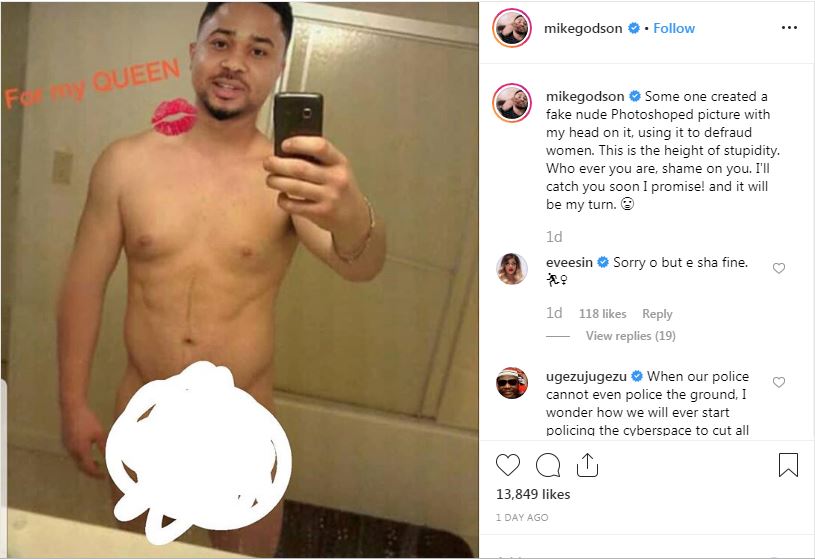 Only in a few years he was able to reach heights in Nollywood and became one of the most famous actors. Today he is one of the most attractive and favorite Nigerian actor. Mike Godson is not only a very talented actor but also a very popular model. Mike Godson has modeled for some popular fashion designers like Nigeria Fashion Designer, Dotun. Besides, Mike presented the most famous brands such as FreshbyDotun unveiled a collection, Sprig of Veldam which featured other celebrities like Okey Uzoeshi, Godwin Nnadiekwe, and artiste Litman.