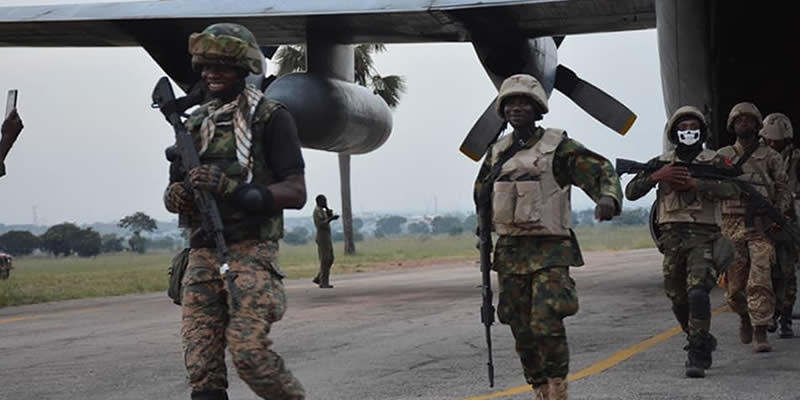 The Air Task Force (ATF) of Operation LAFIYA DOLE, on Monday said it has decimated a major tactical base of the Boko Haram Terrorists (BHT) in Borno State.

The Nigerian Air Force (NAF) said the ATF also neutralised scores of insurgents’ fighters at Izza on the fringes of the Sambisa Forest in Borno.

Air Commodore Ibikunle Daramola, NAF Director of Public Relations and Information disclosed this in a statement on Monday in Abuja.

Daramola said the intensive air strikes were conducted under the auspices of Operation GREEN SWEEP III.

He said Operation GREEN SWEEP III is aimed at some identified terrorists’ positions in Borno.

“Consequently, the ATF scrambled three Alpha Jet aircraft to attack the location, with the timing synchronized to inflict maximum damage and mortality on the terrorists.

“As a result, there was massive devastation on the affected target while scores of terrorists were killed in the process,” NAN quoted him as saying.

Daramola said the NAF, operating in concert with surface forces, would sustain its efforts to completely destroy all remnants of the terrorists in the North-East.

Meanwhile, NAF had on Saturday successfully destroyed a Boko Haram Terrorists’ (BHT) Command and Control Centre in Dusula, on the fringes of the Sambisa Forest in Borno State.

Daramola said this was sequel to a renewed offensive aimed at further eliminating remnants of Boko Haram and Islamic State of West Africa Province Terrorists (BHT/ISWAP) in the North-East of Nigeria.