DMW boss, and ‘Blow My Mind’ crooner Davido also known as OBO took to his Instagram page to appreciate his manager Asa Asika, whose birthday was yesterday. OBO shared a picture of Asa and wrote:

“If I start to write I no go finish !!!! HBD ASA THANKS FOR EVERYTHING!!!! TOGETHER THEY KNOW SAY WE DEY GIVE DEM PROBLEM ! DIA FADA LEFT NYANSH! Love u 4 life!!” 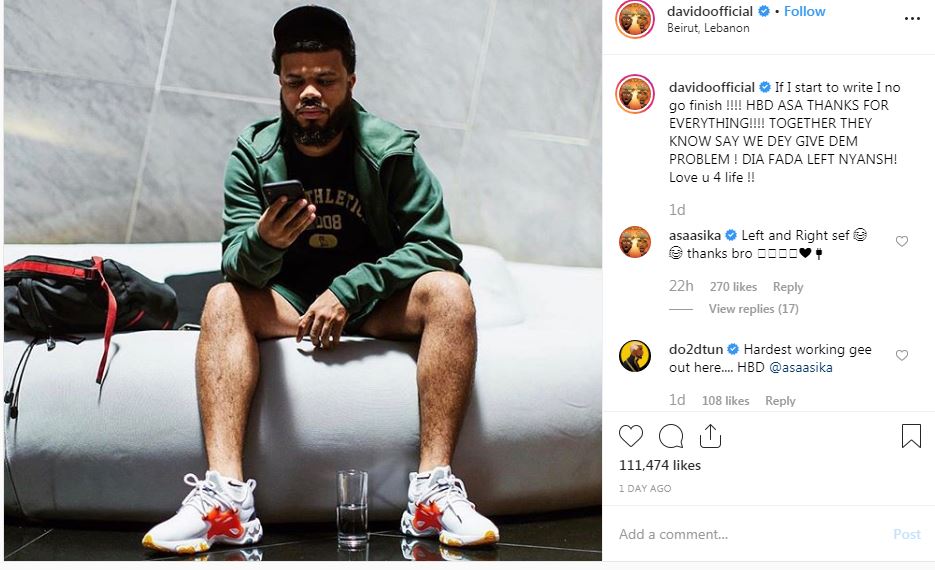 The duo have been together for a very long time and have grown and graduated from the manager-artiste relationship to becoming more like brothers now.

Recall Davido was in the news earlier as he paid tribute to his late friend and official Dj, Dj Olu. The ‘blow my mind’ star took to his IG page to remember, mourn and celebrate his late padi, Dj Olu.

Olugbenga Abiodun aka DJ Olu who was the son of current Governor of Ogun State, Dapo Abiodun, died in October 2017. He and his friend, Chime Amaechi, were found dead in his car in Lagos.

Posting this photo of DJ Olu on his IG page, Davido wrote