Davido took to his IG page to remember his friend, DJ Olu, who would have turned a year older today August 14th.

Olugbenga Abiodun aka DJ Olu who was the son of current Governor of Ogun State, Dapo Abiodun, died in October 2017. He and his friend, Chime Amaechi, were found dead in his car in Lagos.

Posting this photo of DJ Olu on his IG page, Davido wrote 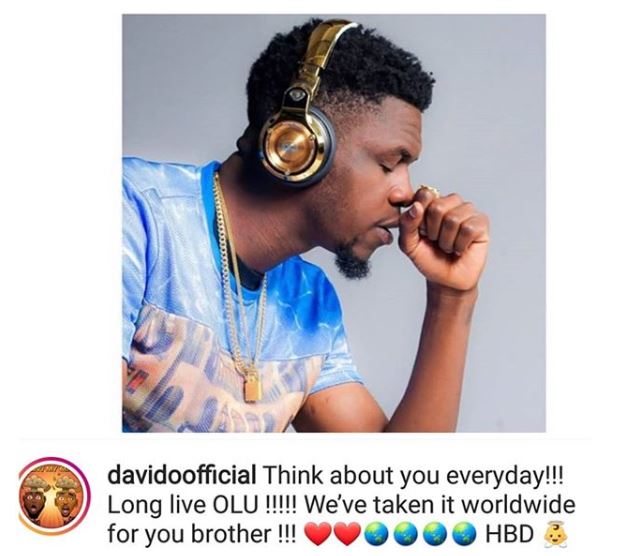 The death of DJ Olu came as a shocking surprise to many and even the circumstances behind his death were controversial. DJ Olu was reportedly found dead in his car.

Gbemiga Abiodun, also known as DJ Olu, one of Davido‘s official DJs, and son of Dapo Abiodun, was reportedly found dead in his car. According to reports, he and a friend Chime were found dead together in the car, just days after Davido’s friend, Tagbo, died after a heavy drinking bout. Davido shared news of his passing, mourning him on his Snapchat.

“2 brothers gone in 4 days,” Davido wrote on his Snapchat. “We killed shows back to back for four years straight. A part of me is broken. I love you, bro, God take control. RIP Olu, I love you more than you can imagine. Till we meet again.”

DJ Olu, Born Olu Abiodun to Nigerian successful entrepreneur Dapo Abiodun started off as an underground DJ in 2010 while studying for his “A” levels in England. After djing and headlining numerous parties across the country, It didn’t take long for him to get noticed. In June 2011 he was signed as the official DJ for Davido’s HKN record label.