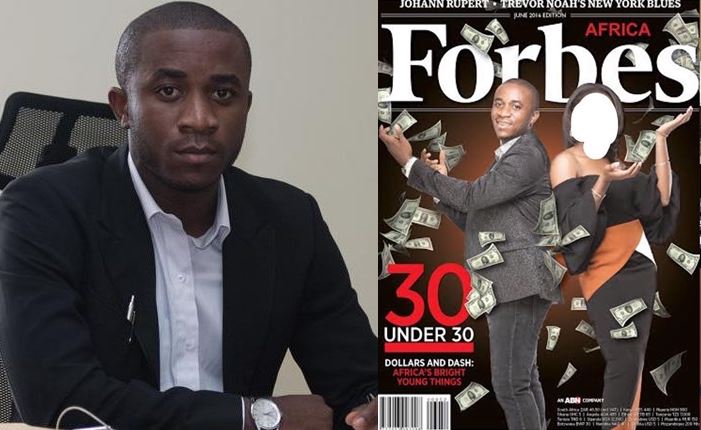 Obinwanne Okeke, a Nigerian businessman and founder of Invictus Group, who featured on Forbes Magazine’s 30 under 30 list in 2016 and Forbes 100 Most Influential Young Africans in 2018, has reportedly been arrested for internet fraud by the Federal Bureau of Investigation (FBI) in the United States.

The 28-year-old Nigerian, Obinwanne Okeke, has a master’s degree in International Relations and counter-terrorism from Monash University Australia, his company, Invictus Group is a conglomerate in construction, oil, gas and agricultural development.

An investigation carried out by the men of the FBI revealed that Okeke hacked into a steel company’s CEO’s Office365 account and committed a wire fraud of $11 million between 2016 and 2018. These were also the periods he inked his name of the aforementioned Forbes’ lists.

The Special Assistant to President Buhari on Digital/New Media, Tolu Ogunlesi, has confirmed Okeke’s news via his official twitter account. He warned Nigerians to desist from internet fraud after sharing the jaw dropping Department of Justice (DOJ)’s affidavit of the supposed business man.

My jaws are on the ground after reading that DOJ Affidavit. Crazy. Social Media played a significant role in the investigations (Twitter, Instagram, Nairaland) – really intriguing stuff. Talk about an unwitting digital footprint. (First 4 pages of DOJ affidavit below) pic.twitter.com/O4I4jcoPND

Next 4 pages of the DOJ/FBI Affidavit. pic.twitter.com/9SVGihXCPX

If you’re a practicing or aspiring Yahoo Boy, please read this affidavit well. If EFCC doesn’t get you, FBI will. They’ve both ramped up their clampdown on computer and wire fraud.

(If you want to insult me on top this tweet, kindly copy @officialEFCC, @FBI and @TheJusticeDept)

However, Nigerians on social media have reacted bitterly to the news of Okeke, condemning the fraudulent act and called out Forbes Magazine for celebrating Okeke who, it turns out, to have make his money through Yahoo Yahoo – a name Nigerians often call internet fraud.

Obinwanne Okeke is the second Forbes Africa under 30 called out for fraud this year. Forbes Africa needs to do more due diligence on their track record before featuring entrepreneurs in their magazine.

I think money is cool but for the under 30 list, Forbes might want to focus more on impact rather than financial net worth. My two cents. This narrative that young people should be amassing wealth is a little weird. And probably even dangerous.

Not only was this Invictus Obi guy on Forbes 30 Under 30, he’s also been on BBC, given a TED Talk, spoke at London School of Economics Africa Summit, was nominated for “Young African Business Leader” at The AABLA Awards, & was a contributor for Forbes.

In 2015, Forbes named Holmes the youngest & wealthiest self-made female billionaire in America on the basis of a $9b valuation of Theranos. Following year, after revelations of potential fraud, Forbes revised her net worth to 0 dollars 😂

I hear Invictus Obi but this.

Forbes celebrated a fraudster, that didnt stop the FBI from doing a detailed investigation and catching the criminal, but EFCC and Nigeria Police will want to explain how our traditional rulers giving chieftaincy titles to criminals hamper their work of prosecuting criminals. pic.twitter.com/rCXqw7hH2z

I’m more disappointed in Forbes for listing Invictus Obi as a “Self Made” Millionaire.
They did the same with Kylie Jenner.

Is it anybody that has enough Money to pay that can appear on Forbes front page? Y’all don’t research again?

Forbes were hailing him as a success at 30 not knowing he hacked a steel company to enrich himself.

This is why you must not compare yourselves with other as you dont know what they did to get to where they are…. pic.twitter.com/3lrduynCGz

This Invictus Obi's story clearly shows that Yahoo Yahoo boys can operate anywhere- even wearing suits. That's why I hardly believe all these influencers giving Tedx Talks if I can't trace their sources of income. Most of them do Yahoo as a major side hustle. Run your own race!

‘Toyin Abraham Was Impregnated By A Guy That She Is Older Than’, Lady Rants (Video)

Femi Otedola redeems pledge of N1bn donation to fight covid-19, calls on others to fulfill their pledges