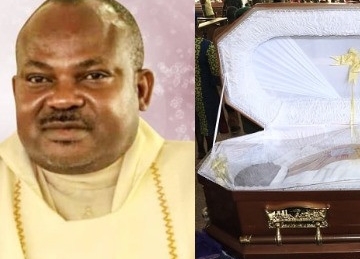 Photos from the funeral of Rev. Fr. Paul Offu killed by suspected herdsmen

The dead body of Rev. Fr. Paul Offu who was murdered in cold blood by suspected herdsmen along the Ihe-Agbudu Road in Awgu on Thursday, August 1st has finally been laid to rest yesterday on Tuesday, August 20th.

The funeral of the 49-year-old Catholic pastor was attended by state Catholic faithfuls as well as Governor Ifeanyi Ugwuanyi.

Until his death, Father Offu was the parish priest of St. James the Greater Parish, Ugbawka.

See more photos from the funeral below;

In other news, three policemen were killed by suspected gunmen when the convoy of Nasarawa state deputy governor, Dr. Emmanuel Akabe ran into the assailants around Gako hill in Nasarawa Eggon local government on Tuesday, August 20th.