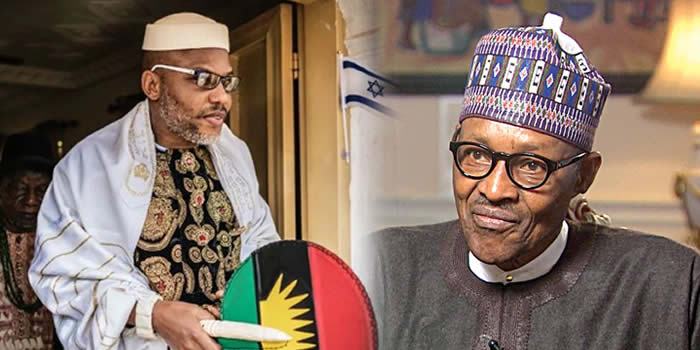 We Will Embarrass Buhari In Japan – Nnamdi Kanu

Following the revelation by Femi Adeshina, Presidential spokesman, that President Muhammadu Buhari would depart Nigeria for Japan on Sunday, the leader of the Indigenous People of Biafra(IPOB), Nnamdi Kanu, has issued a stern warning.

Speaking on Biafra radio on Friday, shortly after Femi Adeshina made the announcement, Kanu disclosed that the pro-Biafra group would embarrass and arrest President Muhammadu Buhari if he sets his feet on Japan soil.

Nnamdi Kanu further explained that Buhari would then be handed over to the Japanese government for his alleged mass murder and crimes against humanity, which he allegedly committed in Nigeria between 2015 and 2019.

Similarly,reacting to the trip, IPOB insisted that Buhari was Jibril Al-Sudan masquerading himself as Nigerian President.

A statement signed by IPOB’s spokesperson, Emma Powerful, on Friday reads: “The formidable IPOB family in Japan is hereby placed on direct order to ensure the impostor Jubril Al-Sudani, masquerading as the late dictator Muhammadu Buhari, is arrested and handed over to the authorities when he sets foot on Japanese soil.

“He is not only a fake president, he is wanted for mass murder and crimes against humanity for his role in previous and ongoing genocide in Biafraland.

“Under Japanese law an impostor is a common criminal and subject to citizens arrest. International diplomatic protocol as it relates to visiting heads of state is not applicable in this instance because whoever Abba Kyari is sending to Japan is not the real Buhari. We must make sure he is apprehended and handed over to the police in Japan.

“Any legal fall-out emanating from any confrontation will end up in a Japanese court where we will be able to establish before the world that Jubril is indeed a fake Buhari.”

Naira Marley Replies Lady Who Asked Him To Impregnate Her