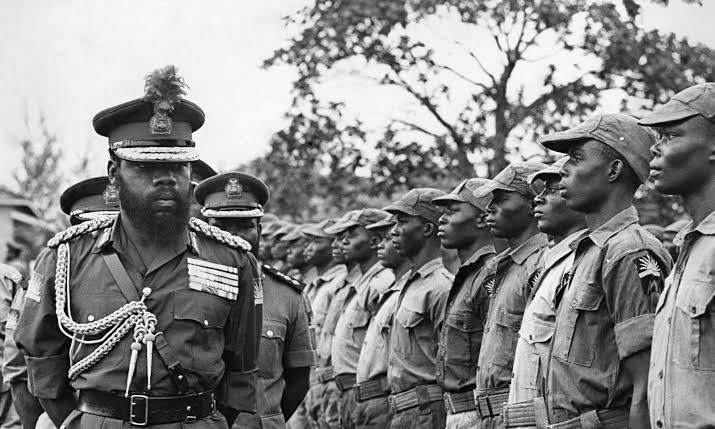 The Nigerian civil war otherwise known as the Biafra war in 1967, broke out as a result of the decision of the Igbos to break out of Nigeria. The Easterners felt alienated from the Nigerian government which was dominated by the Northerners.

During the war, quite a number of things happened that were not aired or published by some of the media organizations in Nigeria. There are so many details about the Biafrans that were never revealed.

So many pictures of fallen soldiers and highly starved Nigerian kids flooded the media of the western communities.

Find below some of the thought-provoking pictures of the Biafran war of 1967: 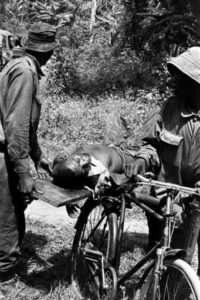 1) A Wounded Biafran Soldier on a  Makeshift Stretcher

A picture of a wounded soldier of the Nigerian troops being carried on a bicycle by his fellow military men. War is such an unpleasant situation. The soldier couldn’t even get a befitting stretcher to help wheel him to the hospital for treatment. 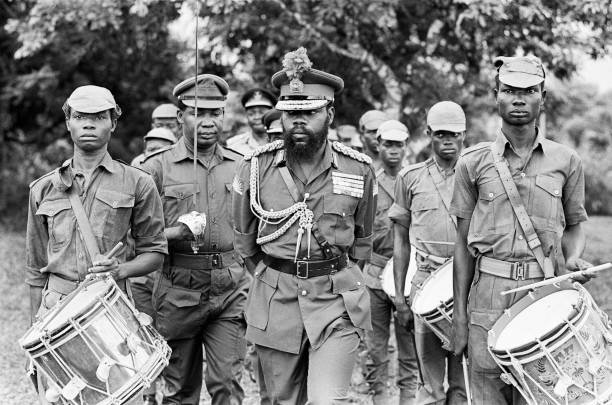 Nationalist and military Governor of the Biafran army Colonel Odumegwu Ojukwu, inspecting some of the newly recruited officers in 1968. This was during the tensed heat of the war. Many teenagers were recruited into the army and made to face war without prior training. 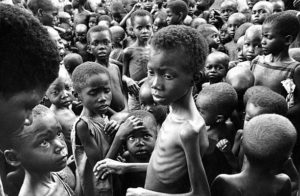 Here is one of the sad consequences of the war. Nigerian government stopped the exportation of relief materials such as food, drugs and every other basic amenities to the East. The idea was initiated by Chief Obafemi Awolowo who was the Commissioner for Finance and one of the advisers to the Head of State. Sad to note, the poor kids of the then Biafran Nation suffered the fierce whip of a war they didn’t orchestrate. 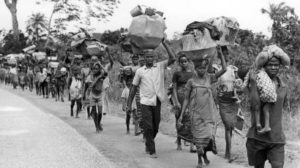 4) Residents of Biafra Flee Their Homes For Safety

Cross-section of Nigerians fleeing their homes in 1968 after they had felt the heavy blow of the war. They were no longer free in the community they once knew, their homes had become a death trap for them. The instinct of fear and survival overshadowed the sense of entitlement. They had to flee to a safer community even if would cost them their freedom. 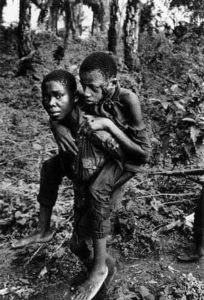 A wounded young Nigerian got help out of the danger zone by a fellow Nigerian. It became glaring that the fight was between Nigerian troops and the Secessionist group not against humanity.

Humanity comes before religion, tribe, language, culture or social status. That is a theory that is as old as creation itself. We all preach it, but this unidentified Nigerian practiced it during the war. 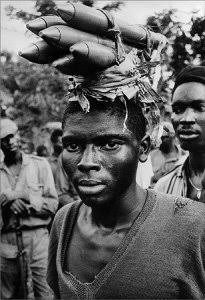 6) A Biafran Soldier With Grenade on His Head

A Biafran soldier carries a sophisticated and delicate weapon rumored to have been supplied by the French Government in 1968. During the war, it was rumored that the French Government threw their weight behind the secessionist group of Biafra. However, in another report that circulated online, the French government revealed their motives for supporting Biafran during the war. They argued that it wasn’t for the breakaway of the Biafra Nation. According to a memo released through the French Secretary-General for African and Malagasy Affairs, Jean Mauricheau-Beaupre argued that France supported Biafra because of Oil and ERAP. 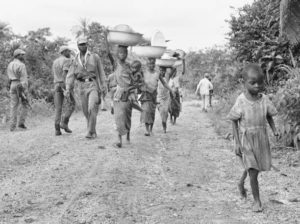 7) The Biafran Army and Women in Search of Food

When the war became a fierce one in 1968, the Government of Nigeria refused to continue sending relief materials to the Igbos. Biafrans were forced to walk hundreds of miles in search of food which made them vulnerable to attacks from the Nigerian troops. 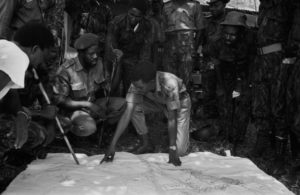 Troops of the Nigerian army, led by Commander Benjamin Adekunle, taking a look at the map of Port Harcourt. The Nigerian troops were looking for a strategic means of entering into the city of Port Harcourt to take possession of it from the Biafran forces during the war in 1968. 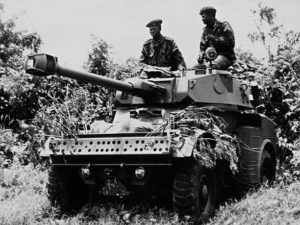 Troops of the Nigerian army invaded a city of Biafra with an armored car. People who have a great penchant for war movies would know the nefarious job that this weapon can do. Nothing ever survives on the land that this armored car has crushed.

Sad to note, the picture above was not taken during movie production. 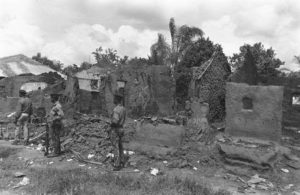 10) A Biafran Community Reduced to Dust

If only one could access the picture of this community during the good old days before the war. An entire village was reduced to dust, a once lively and bubbling city was turned into a desert by war.

There you have some of the thought-provoking pictures from the Civil war. Those who fail to learn from history are bound to repeat it again. It is expedient that all Nigerians should start preaching peace not war, enforce unity and not secession.