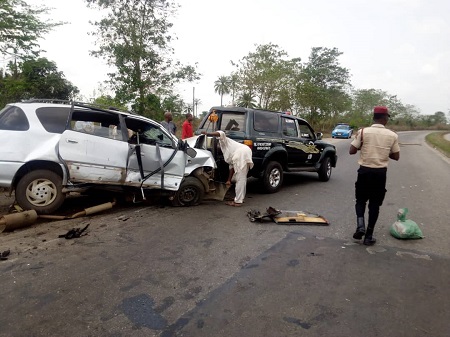 Three persons were confirmed dead barely 24-hours after diversion at the lagos-Ibadan Expressway in  an accident involving a Toyota Sienna and a Mack tipper around Onigaari on Lagos-Ibadan expressway.

Mr Babatunde Akinbiyi, the Spokesperson for Traffic Compliance and Enforcement Corps (TRACE), confirmed the incident to News Agency of Nigeria (NAN) in Abeokuta on Monday.

Akinbiyi said that the accident was caused by speeding and recklessness of the driver of the Siena car marked MUS 932 FE which rammed into a stationary tipper.

He said that 12 persons involved in the accident included 10 adults and two kids.

”I learnt the Sienna is a commercial vehicle loaded from Ibadan to Lagos when it suddenly lost control due to speeding and reckless driving and rammed into the stationary tipper parked by the roadside,” he said.

Akinbiyi said that the injured victims were rescued and taken to Victory Hospital, Ogere, while the deceased were deposited at FOS Mortuary, Ipara, Remo.

INEC dumped me after accident, Ex-corper deployed for 2019 election…

He commiserated with the families of the dead, while also enjoining motorists to avoid excessive speeding, especially during the raining season because of attendant challenges.

Akinbiyi advised articulated vehicle drivers to desist from parking close to the highways.