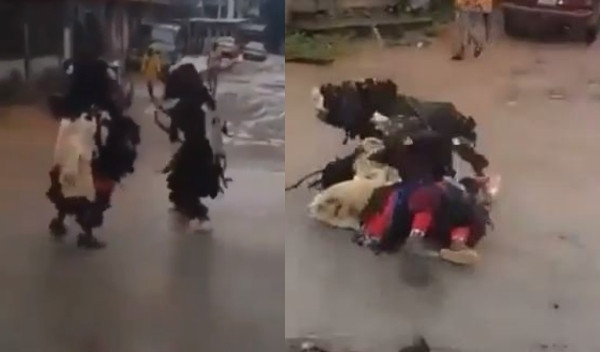 VIDEO: Drama as two masquerades were seen fighting on a busy road

Drama as two masquerades were seen fighting on a busy road and this comic display was captured by an unknown person and it has gone viral.

Like a comic nollywood movie it was for spectators who witnessed or watched the captured moment of two masquerades seriously fighting each other in the middle of a busy road.

From the language both masquerades speak, it could be deduced that the incident occured in the South-East region of Nigeria.

The masquerades were first spotted flogging themselves with canes before being seen pinning each other down on the busy road as the fight got much more fierce.

In other news, no fewer than nine people on Monday narrowly escaped death when a fuel-laden trailer crushed a motorcycle and a micra car in Ibadan, the Oyo State capital.