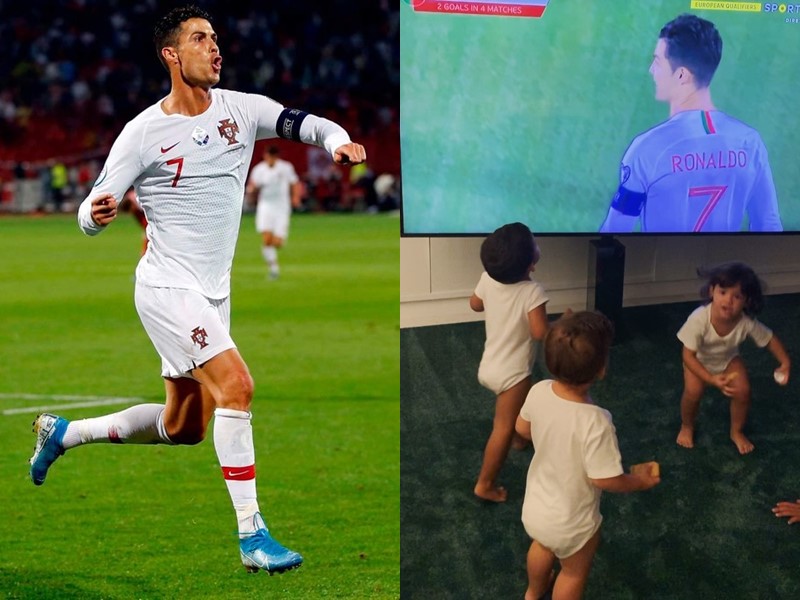 Last Night, Cristiano Ronaldo scored 4 goals in a Euro 2020 Qualifiers game to break yet another record as the forward shows no sign of stopping even at age 34.

Ronaldo’s fans all over the world went crazy with celebrations and he became the number one trending topic on the internet (which is also a normal occurrence).

Ronaldo’s children were in their home watching their father play a football match when their mother, Ronaldo’s girlfriend, Georgina Rodriguez, recorded them.

When Ronaldo was shown on the screen, their toddlers rushed to the TV pointing at him and screaming “papa”.

Cristiano Ronaldo might be 34 but he has shown no signs of slowing down as he brushes aside Lithuania with a mouth-watering display where he netted four.

The Portuguese is at his flowing best and appears determined to beat the record for the most International goals by any player. Lithuania were the latest victims of his sporadic shootings and incredible vision for goal.

The four-goal haul saw him add another record to his many-paged book of records. The Juventus forward now has the most goals in the Euro qualifiers with 25 goals.