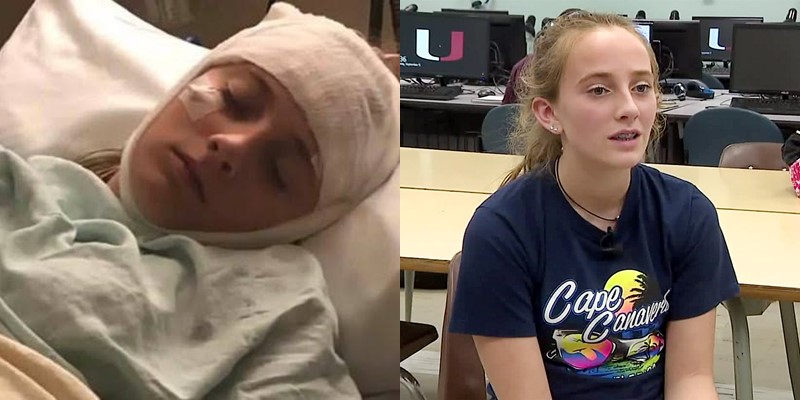 An Illinois teenager wakes up every day thinking it’s June 11, the day she suffered a traumatic brain injury that makes her memory restart itself every two hours.

Riley Horner was accidentally kicked in the head by a student who was “crowd surfing” during a dance at a youth agriculture convention in Illinois. The incident happened on June 11. Now, whenever Riley wakes up, she believes it’s the same day that she was kicked.

The injury caused Horner to suffer numerous seizures. Doctors originally thought she had a concussion and they sent her home but they’ve been left confused by her current condition.

BBNaija’s Tboss reacts after being bullied for dressing like a…

By-force-marriage organised for young boy who impregnated teenager in…

Riley’s mother, Sarah Horner, told WQAD: “They tell us there’s nothing medically wrong. They can’t see anything. You can’t see a concussion though on an MRI or a CT scan. There’s no brain bleed, there’s no tumor.”

Due to the constant memory resets, Riley is forced to carry a notebook and pencil everyday in school to help keep track of which locker is hers, what day it is, and what she has already forgotten.

“Like I will have no recollection of (this interview) come supper time…I’m not making memories. And I’m just like really scared.”

Sarah Horner said her brother recently died, but said Riley “probably has no idea. And we tell her every day, but she has no idea about it.”

She continued: “(Doctors) told us she might just be like this forever. And I’m not ok with that.”

Sarah said she is now desperate for doctors to find out what is wrong with her daughter before it’s too late. She said she researched short term memory loss and found it can cause irreversible damage after six months.

“We need hep. We need somebody that knows a little bit more because she deserves better. I mean, she wanted to be in the medical field and now she can’t even hold a job if she wanted to.”

As for Riley, she said she just wants to find someone else who is experiencing the same mysterious illness, so they know they are not alone.