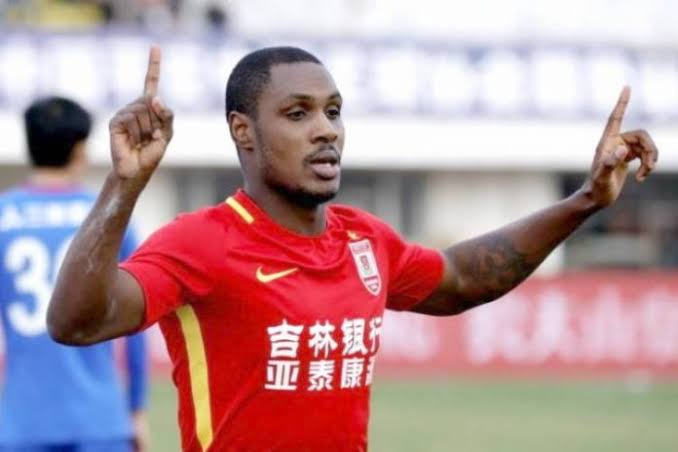 AFRICA Cup of Nations (AFCON) 2019 hotshot, Odion Ighalo returned to action for his Chinese team, Shanghai Shenhua but could do little as his side slumped to a 3-0 home defeat to Tianjin Teda.

The 30-year-old striker was introduced in the 55th minute for Stephan El Shaarawy of Italy with Shanghai Shenhua already three goals down.

The homers needed a saviour and the fans would have thought that the Nigerian striker would haul them back into the game.

However, the Nigerian had the chance to make a goal-scoring return but he missed a penalty in the 64th minute after Haixin Li was brought down in the 18 yard box. Ighalo also had two shots off target as he tried to make up for his penalty miss; while Tianjin Teda goals were scored by Frank Acheampong (12min), Sandro Wagner (21min) and Zheng Kaimu (51 min).

Despite being on the losing side in his first game after two-month injury lay-off, Ighalo remains giddy with happiness in a series of post on one of his social media accounts saying :“Once has the Lord spoken and twice have I heard that all powers in Heaven and earth belongs to him ; the battle is of the Lord.”

Pressed by The Nation Sport on his return to action, an excited Ighalo posited further: “I missed football, feels so good to be back after two months .”

It would be recalled that the Nigerian striker copped a hamstring injury on 17th July when the Super Eagles played Tunisia in the bronze medal game of the AFCON and had been out of action for 60 days missing seven games in the Chinese Super League.

The forward had remarkably scored seven goals in the 2019 Africa Cup of Nations qualification campaign, the most by any player, to help Nigeria qualify for the finals for the first time since 2013.

He was included in Gernot Rohr’s squad, taking part in all the matches and finding the net once against Burundi in the group phase (1–0); a brace against Cameroon in the round of 16 (3–2 win), as well as a goal each against Algeria in the 1-2 semi-finals loss and in the 1-0 win against Tunisia in the third-place playoff. At the end of the competition, he announced his retirement from the international football.