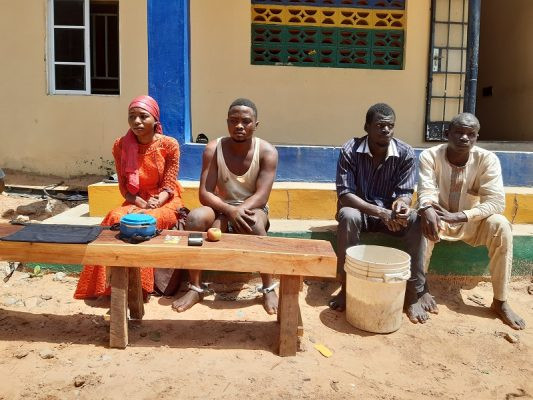 The indigene of Lafiya Lamurde Local  Government Area of Adamawa state who was paraded before newsmen reportedly connived with one Bala Shuaibu to abduct the victim from school.

The suspect kept the little girl at a hotel in Nayi-Nawa area of Gombe metropolis and demanded N6 million as ransom from her parents. Police Public Relations Officer, SP Mary Malum said Hadiza was arrested based on credible intelligence the SARS operatives got.

She said, “During the course of interrogation, Hadiza Babayo confessed to the crime and stated how she and one Bala Shuaibu, abducted the victim from Gombe High school and kept her in a hotel at Nayi-Nawa quarters Gombe, where they demanded a ransom of six million naira (N6m) from the victim’s father before she could be released.

“The SARS operatives responded swiftly and rescued the victim unhurt, without any ransom”

Hadiza whose confession led to the arrest of the other suspect, said the guy she contacted to kidnap her cousin in order to get money from her uncle is her boyfriend.

31 Coronavirus patients on the run in Gombe

“After bringing her from school, I arranged to take her to my boyfriend (Shuaibu), we wanted to use the opportunity to get money from my uncle since he had not shown me enough care,” she said.