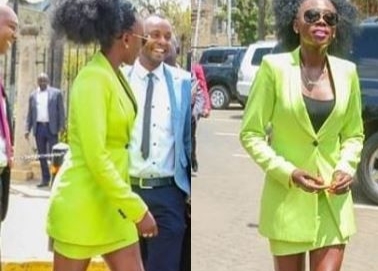 It was like a movie at the Kenya parliament when a kenyan singer, Akothee was ordered to cover her legs in a wrap during a visit to the parliament before speaking with the lawmakers.

Akothee who wore a green micro mini-skirt was at the parliament to appeal to lawmakers to do more to assist the estimated one million drought victims in the north-western Turkana region.

However, two Kenyan politicians and members of parliament, Ndindi Nyoro and Maina Kamanda were captured in a video fighting yesterday in church.

The two politicians were at the Gatui Catholic Church in Muranga and reportedly fought over the control of Kiharu constituency, GhanaGuardian reports.