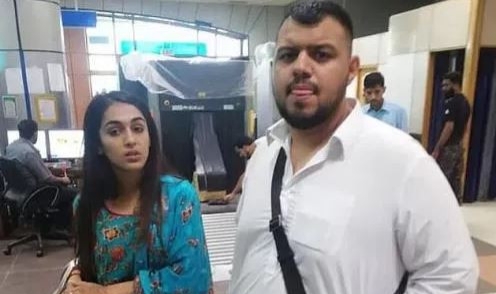 Pakistani authorities have arrested a couple at the Sialkot International Airport for allegedly attempting to smuggle £2m worth of drugs into UK.

The couple identified as Mohammed Tahir Ayaz, 26 and Ikra Hussain, 20 of Huddersfield, West Yorkshire could face either death penalty or life imprisonment.

According to the police, the couple were planning to fly from Pakistan via Dubai to the United Kingdom. They were arrested as they attempted to board the Emirates Airlines flight on Thursday, September 19th.

Airport police found an estimated 25 kilograms of ‘fine quality heroin’ hidden in female clothes. The drugs were split in different packets and divided across a number of garments, the Mail Online reported. Officials removed the bags containing the drugs and placed them into a blue carrier bag for weighing. It returned a weight of 25kg.

However, the Narcotics Control Bureau in Delhi on Monday, May 27, arrested two Nigerian nationals and one Ugandan woman in possession of 5 Kg of heroin and 2.6 Kg of cocaine.

“Two Nigerians and one Ugandan national were arrested and drugs worth Rs 25 crore were recovered from their possession on Monday.”