Nigerian singer, Jaywon is not happy with the newly released nominee list for the 13th Headies scheduled to hold on October 19th in Lagos.

The singer who is angry that his songs ‘Aje’ and ‘Saro’ didn’t get nominated in either “Best Vocal Performance” or “Best Alternative Song’ took to Twitter to say, ‘the Headies’ award committee has always been shit to me’. 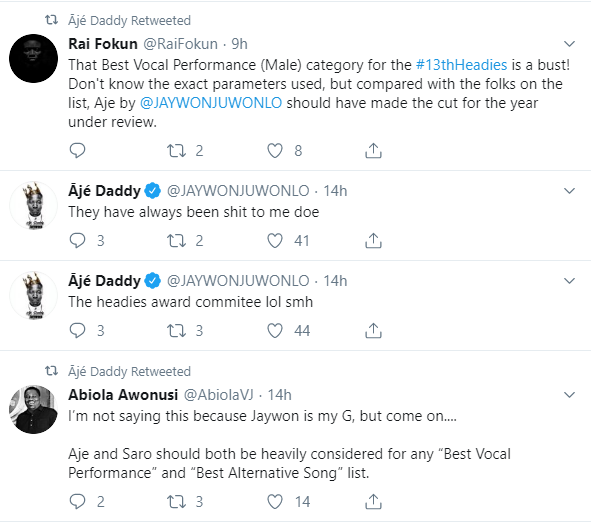 Meanwhile, Nigeria’s biggest and most prestigious music award show, The Headies, opened its doors to receive entries for its 13th music award with this year’s edition themed ‘The Power of A Dream’.

The year in review was announced as January 2018 and June 2019. The award show is scheduled to hold October 19th, 2019. Running for over a decade, the 13th Headies award will feature 29 unique categories in recognition of Africa’s finest artiste.

The last edition saw Nigeria’s sensational artiste, Olamide, with the highest number of nominations (10). He was closely followed by Tuface (7), Wizkid (6), Davido (4), and Clarence Peters (4).