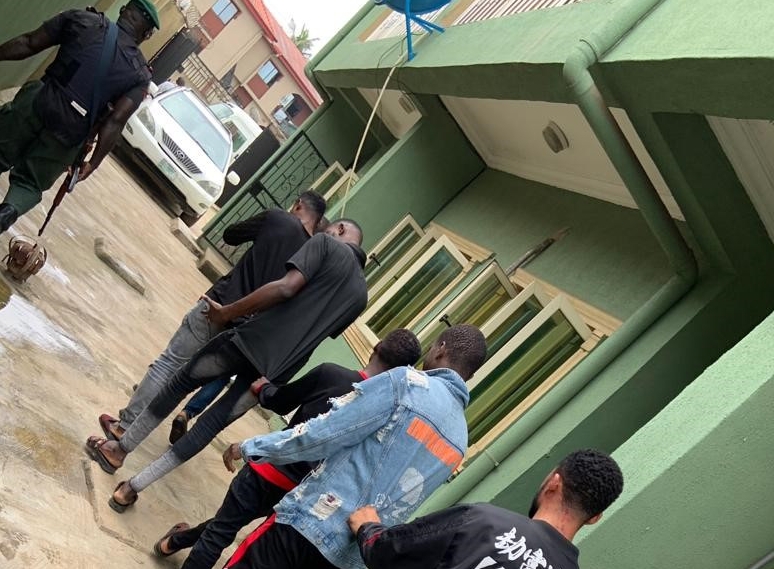 Six suspected internet fraudsters have been apprehended by the Economic and Financial Crimes Commission (EFCC) in Lagos.

The suspects identified as Olubodun Victor, Alade Amos Opeyemi, Harry Osaremesin, Omojuyigbe Paul, Osaro Aganwonyi and Oluwaseyi Gabriel Obe were arrested by the EFCC operatives during a sting operation in the early hours of October 3 at Igando Area of Lagos State.

During the sting operation, EFCC operatives were able to recover mobile phones, laptops and a car from the suspects and they will soon be charged to court.

The suspects, Oluwaseyi Gabriel Obe, Omojuyigbe Paul, Olubodun Victor, Alade Amos Opeyemi, Harry Osaremesin and Osaro Aganwonyi, were arrested during a sting operation in the early hours of today, October 3, 2019 at the Igando area of Lagos, following intelligence reports received by the Commission about their alleged involvement in the criminal activity.

Items recovered from the suspects at the point of arrest include mobile phones, laptops and a car.

The suspects will soon be charged to court.

Lagos conductor lands in court for withdrawing N80,000 with ATM card stolen from…