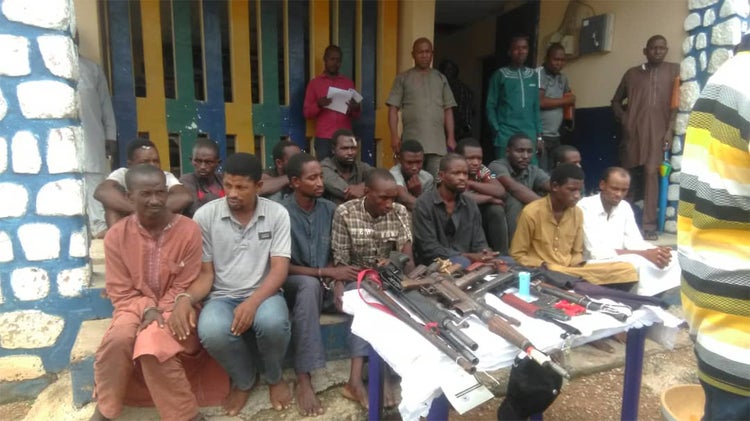 Police parade undergraduate, others for kidnapping

An undergraduate of Computer Science at the Adamawa State University, Abdulbasit Umar, was yesterday paraded by the Taraba State Police Command for kidnapping his 10- year-old biological sister, Amina Umar.

The 22-year-old student, who was paraded alongside with his accomplices, Sadiq Dalhatu Sani (21) and Abdullahi Habib (27), who he allegedly hired to carry out the act, were all arrested following a tip-off.

Parading the suspects alongside 19 other kidnappers and armed bandits, the Police said the suspects were responsible for the kidnappings in Gassol, Bali and other parts of the state.

They were also paraded alongside arms, ammunitions, a vehicle and other accessories used in carrying out the acts.

According to the Police Public Relations Officer (PPRO), David Misal, said: “The mastermind of the crime, Abdulbasit Umar, who happen to be a biological brother to the victim, has on the said date, criminally conspired with other suspects and lured the innocent girl into a blue Honda Hennessy car, with registration number, Kaduna MKF 67JK, and took her to Dove Hotel along Mayo Dassa road in Jalingo, where she was held captive.

The suspects, he said, contacted the family and demanded for a ransom of N10million, but later accepted to collect the sum of N4million.

In the process of collecting the ransom at Wuro-Sambe in the outskirts of Jalingo, they were tracked and arrested, while the victim was rescued.

Umar explained that he staged the kidnap of his sister to make his father cough out N10million to enable him travel abroad.

His other accomplice, Sani, a 300-level Geology student of Modibbo Adama University in Yola, said he has been a childhood friend of Abdulbasit, who sought his assistance to perpetuate the act.