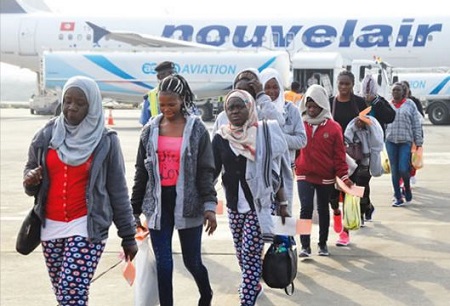 This was confirmed by the National Emergency Management Agency (NEMA), which said that it had received two batches of the Nigerians from the North African country.

The returnees who arrived the country in two different flights were received by the NAMA Coordinator, Lagos Territorial Office, Alhaji Idris Abubakar Muhammed, at the Cargo Wing of the Lagos airport.

One of the aircraft that brought them in was a chartered flight belonging to Al Buraq Air with flight number BRQ189.14 and another with registration number 5A-DMG.MRA.

The former landed at about 04: 52 a. m with 162 Nigerians from Misrata while a commercial airliner brought 11 other returnees from Bengazil and landed at 5:15 a. m.

Among the returnees were 21 with medical issues.

A returnee, Miss Areni Aishat, 23 years old, from Ogun state narrated how she was deceived with the promise of traveling to New York City, USA with the opportunity to practice catering.

She said that she just graduated as a catering apprentice and her Aunty told her that she could help her to travel to USA where she could get a better job related to her profession.

“She told me that she would pay for my transportation and that I would refund when I start working there.

I did not know that she was deceiving me until we left home and embarked on long journey. It was my mates that revealed to me that it was Libya they were heading when she started making trouble that it was USA she was promised,” she said.

Miss Areni disclosed that when she arrived Libya, she was told that there was nothing like catering job that either she became a house girl or to be sold out to a place they referred to as Connection House, which is a centre for prostitution network.

She said she worked for one year and three months but paid her trafficker five months salaries of N90, 000 per month.

“I decided to return home because the nature of the work is not ideal for human being,” she added.

She has advice for those hoping to travel to Libya.

“I will advise whoever is thinking of travelling to Libya to never contemplate doing so. Nigeria is far better than Libya, Libya is dangerous, it is either you are kidnapped, killed, raped, robbed or bombed here and there. Nigerians are not safe there,” she warned.

Areni stated that she was tired of staying in Libya and revealed how she was able to join this batch of returnees back to Nigeria.

“I was helped back to the country when my mother went to the National Agency for the Prohibition of Trafficking in Persons (NAPTIP) office to complain and a phone number of a staff of Nigerian embassy was sent to me and it was the embassy staff that facilitated my return to the country. I am grateful to the Nigerian government for helping me back to the country,” Miss Areni said.