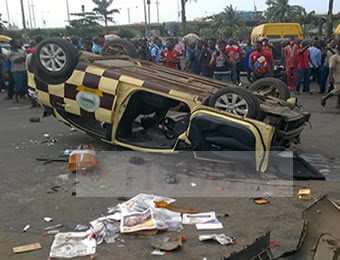 Tragedy was averted, as Officials of Lagos State Transport Management Agency (LASTMA) narrowly escaped death on Wednesday, they were said to have involved in an auto crash, with their vehicle somersaulting on the highway while chasing a traffic offender, along Maryland in Lagos.

Eye witness account disclosed to WITHIN NIGERIA that the accident occurred on Wednesday afternoon and that the LASTMA officials involved in the accident while chasing a car along the Maryland route.

However,  the Lagos State Transport Management Agency (LASTMA)   officials were also on ground to control the incident against serious traffic gridlock along the axis.

WITHIN NIGERIA learnt that no casualty was recorded as at the time of filing this report.

LASTMA Officers involved in accident while chasing a car in Maryland, Lagos State